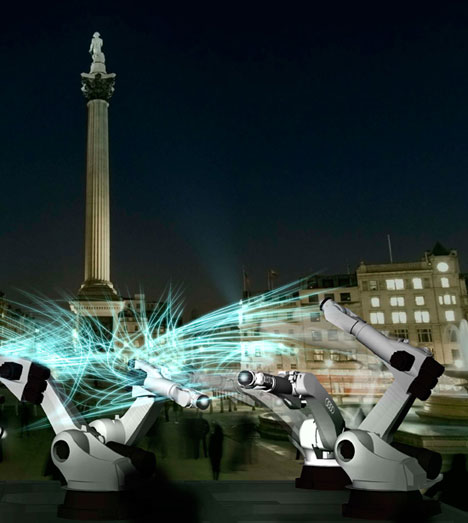 If you're one to fantasize about having control over large-scale robots in a public space (to do good, not evil, of course), Kram/Weisshaar has teamed up with Audi to make your dreams come true during the 2010 London Design Festival.

As this year's Trafalgar Square Installation, Clemens Weisshaar and Reed Kram designed Outrace, an interactive installation in which the public - both those in Trafalgar Square and a remote global web audience - send instructions to eight large-scale industrial robots, on loan from Audi's manufacturing line. Through the Outrace website during the Festival, participants can send text messages from phones and computers, which are then transcribed as 3D light messages by the installation. 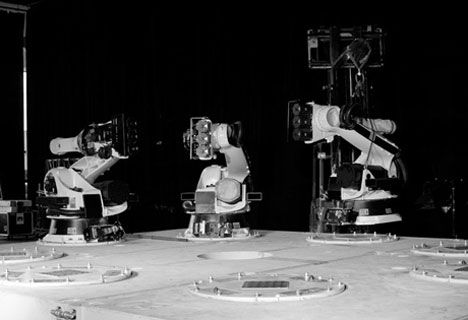 Working with a team of Audi's automation and robotics experts, Kram/Weisshaar attached powerful LED light heads (adapted from the Audi R15 TDI race car) to the synchronized mechanical arms. Shown briefly in a nice little video preview, the robot arms elegantly dance, tracing messages in the air. The light trace will be simultaneously recorded through a system of high def, long-exposure cameras, then encoded as a video and relayed back, to be shared across social media. 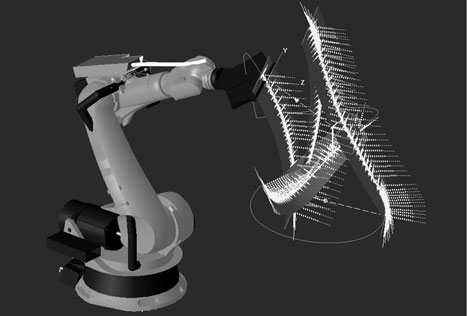 The Outrace site provides a nice preview of the project, complete with images of the robots in their day jobs on the Audi line: "Removed from their everyday context behind factory walls and taken onto a trip to London's most public square they are mighty ambassadors from a foreign land within our midst that produces the goods we use and the cars we drive."