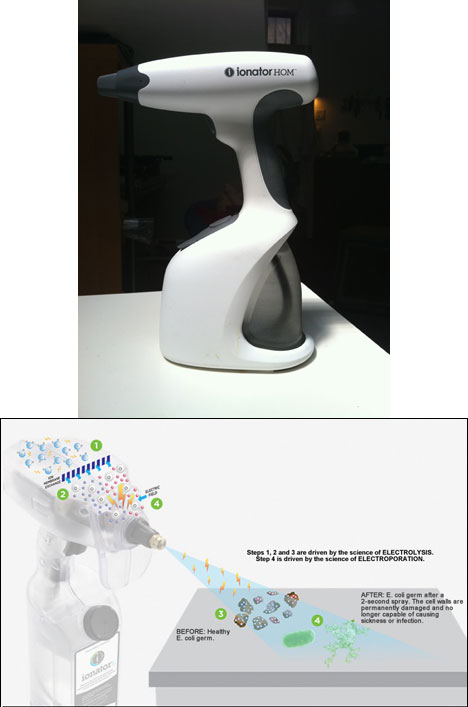 ActiveIon's Ionator HOM is a magic cleaning machine. Intended as a replacement for endless bottles of spray cleaner, the large, drill-gun-like device converts regular tap water into an ionized mist that lifts dirt off of surfaces and kills bacteria. There are no chemicals involved.

For two months we've been putting it through its paces in both a home and commercial environment to see how it stands up. Can regular tap water clean what normally requires bleach, ammonia and other chemicals?

The answer is yes, and the device is pretty darn impressive in action. How to Use It

You press a button with a padlock icon on the Ionator's body, and the little plastic receptacle pops loose, allowing you to remove it from the bottom of the device. The receptacle holds about a cup and a half, or 350mL, of water; you fill it up with regular tap water, pop it back into the "gun" and you're good to go. There's no instructions necessary and the shape of the receptacle means it only fits into the gun one way. My mechanically-challenged parents could figure this thing out no problem.

Once it's charged and filled, you just hit the trigger button and spray the watery mist over whatever you need to clean. It raises dirt, grease, fingerprints etc. up off the surface, and then you simply wipe it away. For testing purposes I used what I expect most people would use, standard paper towels.

How Well Does it Clean?

Bottom line: It cleans fantastically. During testing I used it to clean countertops, tables, walls, floors, my dogs' food bowls, you name it. After the domestic testing I used it in the heavily-trafficked photography studio I run on the side.

What I found is in general, the smoother the surface, the easier it is to clean with the Ionator. One or two passes with a paper towel and you're done. Surfaces that have a little texture to them, like a melamine countertop or a regular painted wall, will take several passes with a paper towel to get out a stain that takes one wipe on a smooth surface. On several occasions, like when cleaning ground-in makeup powder off of a white melamine countertop, it required a scouring pad to raise the offending matter up out of the microscopic valleys and troughs of the texture. But there wasn't anything, except the burn mark left by a hair iron, that the Ionator couldn't take off.

The only fabric I tried cleaning were the white vinyl banquettes in the photo studio, which are often covered in filthy footprints after I let my dogs jump all over them. I normally clean the banquettes with Windex, but the Ionator got rid of the prints in a single pass.

There were at least two extremely impressive cleaning feats the Ionator performed. The first was in my shower, where a built-up layer of scum coated the tiles. (I want to say I let the scum build up for the purposes of this test, but in reality I'm just a filthy bachelor.) A cleaning job like that normally takes a Scrubbing-Bubbles-like chemical cleaner and a scouring pad. But spraying it with the Ionator, all of the gunk came off the tiles with a single wipe of a regular paper towel. I couldn't believe it.

For comparison's sake I tried doing the other side of the shower with just a regular spray bottle filled with water, and the scum didn't come off at all. It was definitely the Ionator that lifted everything up off of the tiles.

The second surprise was with glass and mirrors. The large mirrors in the photo studio are a pain to clean as they're often covered in the high amount of dust the crews kick up as well as makeup smears and a patina of greasy fingerprints from moving the mirrors around to suit their particular set-ups. I go through tons of Windex to get them clean and streak-free, and it takes forever.

I sprayed the mirrors down with the Ionator and wiped them down with a paper towel, making minimal passes over the same spot, just to see what would happen. Immediately afterwards I was disappointed, because although the paper towels were clearly dirty and had picked stuff up, the mirror was covered in a misty glaze of what looked like microbubbles. But I was astonished when I came back about 30 seconds later to see the mist starting to disappear, and in a minute it was gone completely. The mirror was so freaking clean it looked like it just came out of the factory. No streaks, no dirt, no smudges, and very little effort.

Good Ergonomics, But Some Design Needed

Because the Ionator is quite large, nearly a foot tall, I assumed it would give me the wrist strain I encounter when using a similarly-sized drill for long periods of time. But the Ionator is light and well-balanced, so you don't really become aware you're holding it, as you do with a heavy tool that starts to tire you out. The grip is perfectly comfortable as well.

I also worried something so tall and narrow would topple over if set down carelessly, but I've yet to knock it over. The base is deceptively stable.

The water receptacle seemed kind of small to me at first, but I find I'm able to get through most good-sized cleaning jobs without having to refill it.

Where it could use a little design help is in the spraying department. The Ionator sprays out in an unchanging cone shape, and there's no way to taper it. (You can try moving closer to the thing you're spraying to narrow the cone, but this throws an undue amount of water on the part.) Basically you have to be careful when spraying something that has parts you don't want to get wet, as overspraying is nearly impossible to control. It's more of a shotgun than a sniper rifle.

The only other minor gripe I have is with the requisite angle of usage. The Ionator's spray mechanism or perhaps the straw used in the receptacle appears to work by gravity. The Ionator sprays perfectly when held perfectly vertical, but if you start angling it forward or backward to spray something you can't quite get at, it starts to gurgle and spit up inconsistently. This is a pain when trying to reach difficult-to-access places.

Every time you hit the button to spray, the water receptacle glows green with an "okay" light. If it glows red, something is wrong with the ionizing mechanism concealed in the body. The company says the device will effectively ionize for about three years. Since we only tested it out for two months, we have no way of confirming this.

Assuming it does last at least three years, the $179 price tag will seem worthwhile as you can use it to replace a host of household cleaning chemicals. We found the Ionator to be good in the kitchen, bathroom, dining area, you name it, as well as good for spot-cleaning the walls and floors. We'd use it to mop floors and wash dishes too if there was a practical way to do it.

To me, the complete lack of chemicals is the best thing about the Ionator. I often handle raw meat in my kitchen and like that the Ionator will kill E. coli, Salmonella, and a host of other bacteria, and I can spray it all over my cooking surface, cutting boards and knives without having to worry about dousing them in chemicals I'll later ingest. The Ionator leaves behind no residue or chemical scent.

The Ionator's hefty price tag may dissuade some; but we hope people won't be swayed into not buying one out of sheer skepticism at its tap water fuel source. The device cleans fantastically, as well as or better than household cleaners in our opinion, and we find the chemical-free nature of it to be a huge plus. If the nozzle issue was addressed and if we could be assured the device will last for a long time, we'd say it was perfect.

Learn more about how the Ionator works here.