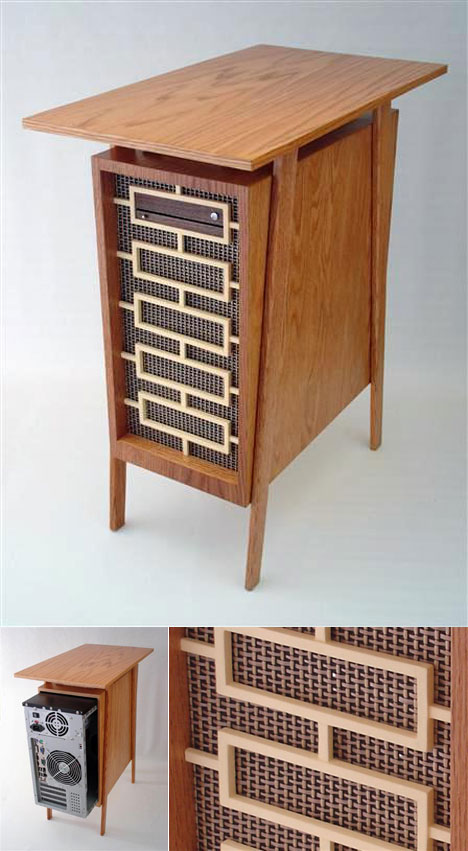 Thanks to both Jeffrey Stephenson and you, our Core77 readership! Back in July we posted some shots-in-progress of Stephenson's Mid-Century Modern PC tower design, seeking your input on some of his design queries; just this morning he's e-mailed us shots of the finished product. Looks pretty sweet, and he's even integrated dual cooling fans into the bottom of the housing.

Hit the jump to read some of Stephenson's thoughts on the project, or check out more shots on Stephenson's website.Mid-Century Madness is a computer enclosure inspired by the television show Mad Men. I was motivated by a challenge from a design blog to build something in the mid-century modern style and this is my response. The idea was to create a caricature of early-Sixties furniture fashion and somehow have it fit into an alternative universe where desktop computers were used in a 1960's Mad Men office. Could this have been Don Draper's PC?

The enclosure is made from a combination of red oak plywood and birch plywood with a red oak veneer. The legs are solid red oak. The plywood panels were hand sawn and the taper in the legs are hand carved. The color is natural red oak that is finished with Danish Oil and semi-gloss brushing lacquer.

For me, mid-century modern means long, thin legs and floating tabletops. These are meant to give an airy appearance to the design. It also means stark minimalism with vast expanses of wood with no fasteners showing.

I grew up surrounded by this type of furniture and my favorite piece was a Curtis-Mathes stereo console that my parents purchased in 1962. For me, mid-century modern conjures up memories of woven cane speaker cloth framed in wood. It also conjures up images of geometric-paneled room dividers. I combined the two ideas into this grille design. The grille is made from 92 pieces of wood glued together into three layers and painted with a color that simulates nicotine-stained ivory.