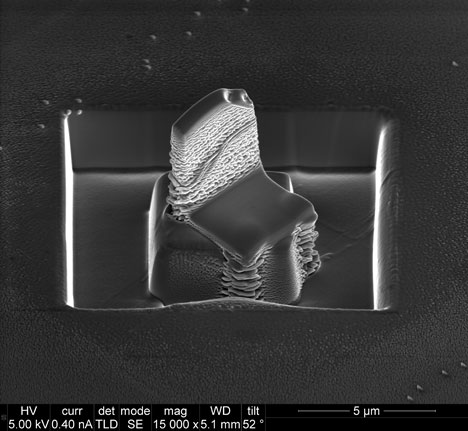 Lucas Maassen likes to make furniture in the hopes that it will mess with your head. Surrealist of mind, he has no interest in creating things that function as we think they do--chairs for sitting in, mostly. Instead, his furniture 'concepts' function to challenge our perceptions. Several of these concepts will be on display for perceiving at CITE Showroom in NYC on Friday, September 10, in "Conceivably: The Object is What it Seems." The exhibit and book launch of the same name, a collaboration with Onomatopee in Eindhoven, will show the designer's explorations into existentialism via furniture, including his "Post-Digital" Collection, which we wrote about last year. That collection includes the Brain Wave Sofa, which addresses a futuristic concept in which a designer's brain is scanned at the moment that they are thinking of what they want to create, the brainwaves are then scanned and CNC milled, forming a couch-as-representation of the brainwaves created by the designer. The width of the couch corresponds to the wave frequencies, while the length is the time axis. The strength of the signal (and the thought) is represented by the height of each bump in the seat. It seems Maassen is asking: Practicing and perfecting this concept, would we eventually be able to control our own brain waves in order to make the couch that we want? Or is he just pointing out that all of the forms we construct and decide we like as designers are simply encasings, and the Brainwave Sofa serves to expose physical form that already exists?

Get it? Nope? Try this one. A simpler example of Maassen's attempts at twisting reality are his series "Sitting Chairs," his graduate project from Eindhoven in 2003, in which he plays with our perception of scale and form. By starting with a basic chair form and adding or removing legs and backs, rearranging them and fitting them back together, and then manipulating scale, Maassen created a grouping of objects that blurs the line between toy and furniture. Some chairs sit dependent on others, and based in their environment and the grouping they live in, they become more of a family, rarely clear which are toys and which are furniture. 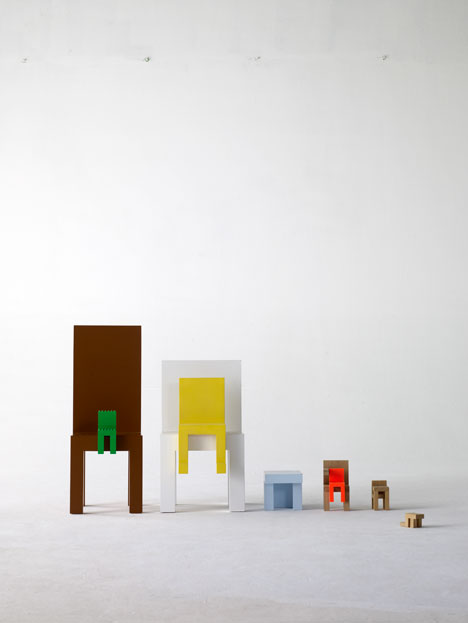 His most recent work, "The Singing Chair," subverts our critical minds by reacting to the viewer before he or she can comment on it, interrupting in a way. Like the Sitting Chairs, it too has a non-descript as-simple-as-possible block form, this one with the addition of an LCD screen embedded in the back, displaying a video of a floating mouth. A sensor gets the mouth moving when a sitter approaches. In this way, Maassen is pointing out that this chair does not serve the sitter, the sitter serves the chair. It's a chair, but it's not really meant for sitting.

These and other explorations into where odd of moments technology, reality, perception, and furniture all merge sit, waiting to screw with your mind, at CITE in NYC through October 11th.