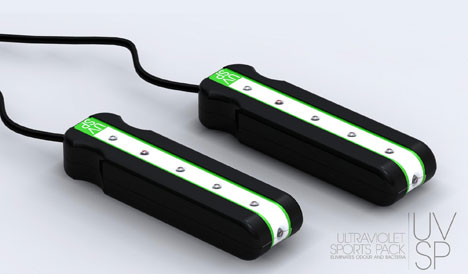 Whenever I see clips of a bold female newscaster doing post-game interviews in a male pro athlete locker room and maintaining her professional composure, I always think that she's probably not struck by the men walking around in various states of undress; she's probably reeling from the unfamiliar smell.

Not sure why sweaty guys smell so bad, but we do, can't help it. Industrial designer Rahim Bhimani's entry in the James Dyson Awards is aimed at this problem: His Ultraviolet Sports Pack is a bag containing two ultraviolet wands that the user inserts into their kicks to burn off that funky odor.

Of course, one potential problem with germ-killing UV light is that it will burn your freaking eyes out. Bhimani gets around this issue by connecting the light trigger to the bag zipper: The juice doesn't kick in until the bag is zipped shut.

The innovation which the UVSP uses the power of UV light, which has been proven to eliminate bacteria and odour within the user's shoe. Once the pack is opened, the user pulls out the UV hubs, and slips them inside the openings of both shoes. The shoes are then positioned inside the bag. The action of zipping the bag closed completes the contact point as soon as the metal zipper reaches the end of the zipper, a safety precaution which protects the user from the dangers of UV light on human eyes. A final contact point on the zipper tag triggers the lighting of a small LED, indicating to the user that UVSP is powered on. The innovative feature of this product is taking the proven UVC technology and incorporating it into a portable athletic bag.