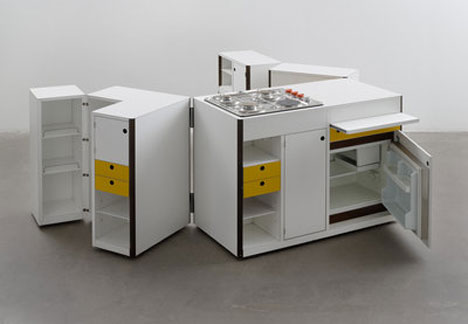 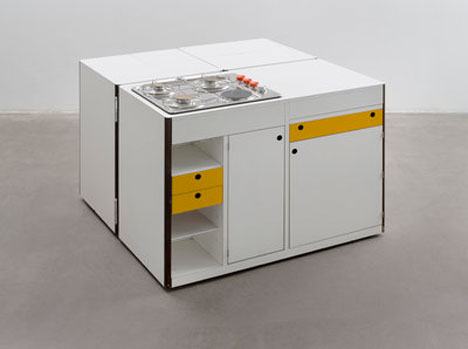 Anyone who cooks frequently likely has an opinion about kitchen organization and convenience, and all have their little differences. Seemingly small decisions like which drawer holds silverware, and the proximity of cooking pans to the stove can suddenly become noticeable issues when using a kitchen layout other than your own. There are accepted standards to this stuff, however, and architect Grete Schütte-Lihotzky was one of the first to establish them through the design of the "Frankfurt Kitchen," created for public housing buildings in Germany post-World War II. The MoMA recently acquired an intact Frankfurt Kitchen, which serves as the centerpiece to the exhibition Counter Space: Design and the Modern Kitchen, opening tomorrow at the museum. The display of the Frankfurt Kitchen will show off this unit designed for efficiency, with its integrated storage, appliances, and work counter, and details like dedicated, pre-labeled bins for staples like flour and sugar. The kitchen, complete with workspace and integrated 'garbage drawer,' was the first of its kind and surely influenced designs like Studio Gorm's Flow Kitchen, which we recently wrote about. From the MoMA description:

Previously hidden from view in a basement or annex, the kitchen became a bridgehead of modern thinking in the domestic sphere--a testing ground for new materials, technologies, and power sources, and a spring board for the rational reorganization of space and domestic labor within the home.

Counter Space will also feature a 1969 mobile fold-out unit manufactured by the Italian company Snaidero, and a variety of "design objects, architectural plans, posters, archival photographs, and selected artworks," from MoMA's collection. The exhibition is on view September 15th through March 14th.