BIF6: Reporting from the first day of the Business Innovation Factory's annual shindig 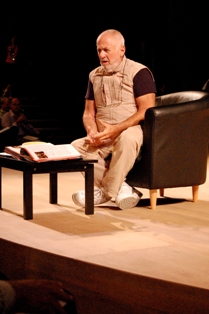 "What I created, I need to destroy." Richard Saul Wurman was on fine, curmudgeonly form on the opening day of BIF6. In particular, he seemed indignant that the 18-minute speech format he coined with the TED conference has been so widely replicated around the global conference circuit. "Speakers are practicing!" he said, in outrage. "They know it's going to be taped and on the fucking television or computer!" This, said one of the world's most convincing hams, quashes both creativity and sincerity. "When you want me to stop talking, say 'that's it'. Be an editor," he challenged BIF's organizers, who limit their speakers to a mere 15 minutes. And to his credit, conference founder Saul Kaplan picked up the gauntlet, standing up after Wurman's time was (well) over and quietly proclaiming "that's it." (Wurman, to give him his due, meekly capitulated.)

BIF is a curious conference, held at the Trinity Repertory Theater in Providence, Rhode Island. An acronym for Business Innovation Factory, the nonprofit organization works year-round to create "real world laboratories" in which organizations can "design, prototype, and test new models for delivering value." Once a year, the team gets to welcome around 300 people to Providence, home of Brown and RISD and a city that's a mix of swanky and seedy. The two day event, now in its sixth year, features heavy-hitters from myriad disparate fields, from corporate innovation departments to leftfield creatives, who all eschew the traditional Powerpoint dek in favor of giving a more personal insight into their lives and worlds.

Here are some highlights from day one: 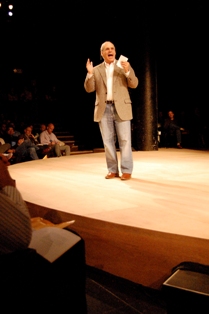 Alan Webber The founder of Fast Company magazine and the day's first speaker provided pretty bleak listening, at least for anyone interested in the state of global journalism. "The mainstream press is more interested in getting tickets to the correspondents' black tie dinner than [in] committing acts of journalism," he said. For Webber, the problem with journalism doesn't arise from the pressure of the web or the 24/7 news cycle, but from the much larger problem that critical stories simply aren't being investigated at all. "We're not digging into the underbelly of what's going on in society, culture, and our institutions, and finding out where the rot is occurring," Webber said. As a result, we all end up smelling bad. 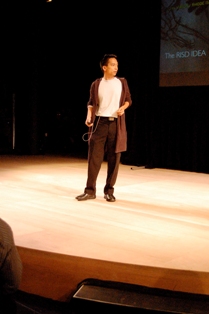 John Maeda The former MIT whizzkid, interaction design guru and current president of the Rhode island School of Design charmingly described a life of never quite fitting in. "Remember Rudolph the Rednosed Reindeer, and the Island of Misfit Toys?" he asked the audience. "That was me. I didn't quite fit into anything." But the guy whose wife worried about what he was doing and why he was doing it sees hope for contemporary creative thinkers who can straddle the worlds of design and technology. Maeda told of reading a piece in Time magazine which detailed three companies that would survive the current recession. Two of the three had been founded by RISD graduates. "Graduates from RISD, from art and design programs worldwide are the misfits," said Maeda. "They're the innovative muckrakers, they're not afraid of getting their hands dirty." And this might just provide the world with the impetus to hit the big "reset" button it so clearly needs. Maeda added wryly. "I swear. Come to the RISD campus. Everyone is dirty." 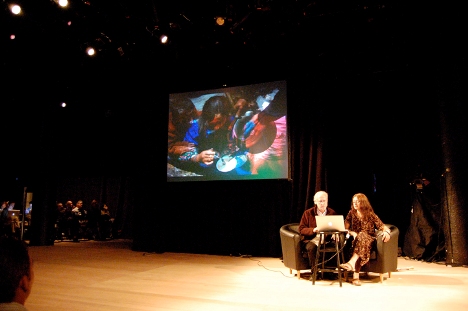 Peter Menzel and Faith d'Aluisio This real life couple gave a slick talk complete with scripted husband-and-wife bickering. But while the humor of the presentation at times felt a little forced, there was no denying the power and impact of their work, the latest of which has been to document the eating habits of different people around the world. From creating shocking portraits of a family's weekly grocery list to their latest book, What I Eat, which features a snapshot of one person's single day's worth of food, their work has both whimsy and shock value. What gives the work real heft is the obvious amount of research that goes into every shot, along with the couple's commitment to making projects as global and diverse as possible. They also feature stories alongside their often provocative images, but steer clear from passing judgment. "A lot of people are looking for a conclusion," said Menzel, who warned those readers were destined to be disappointed. "We conclude you should read the stories, look at photos and think for yourselves." 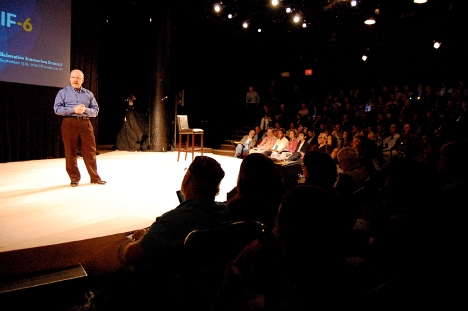 John Hagel Hagel, co-chairman of Deloitte's Center for the Edge and co-author of the recent, must-read book on the state of play within the world of corporate innovation, The Power of Pull, gave what he'd touted somewhat nervously beforehand as a "revealing story" about himself. In fact, while it was the charming tale of a clever boy bunking off school, it was also a highly articulate run through some of the main challenges facing corporations today, not least that too often, executives quickly narrow the very idea of "innovation" to mean either product or technology. Instead, he advised, it's time for those same execs to think about innovation on a whole new level, and to build a new rationale for firms that can embrace and enhance a workforce in a new, empassioned way. 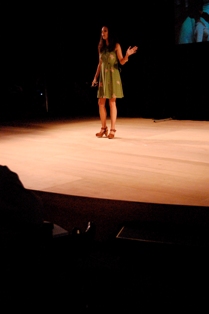 Rita J King King gave a whiplash tour of her forays into the much-maligned virtual world of Second Life, providing a sense of the insights she has gleaned from interacting with the avatars of real-life, digital people. In particular focusing on her work on the project Understanding Islam through Virtual Worlds, King recounted many of the insights these anonymous encounters afforded the project. In fact, she said, much of the work would simply not have happened if the locale had instead been the real world. Instead, initial digital encounters allowed King and partner Joshua S Fouts to build significant trust among interviewees. Later, they brought many of those virtual interviews into the real world, traveling around the globe to meet the flesh and blood counterparts of the avatars they'd been chatting with. "Those real world interactions were so candid because we'd had those extensive dialogs prior to meeting," said King. For anyone weary of trying to explain—again—why Twitter is so much more than merely the account of what someone had for lunch, this was a timely reminder of the real depth of digital encounters. 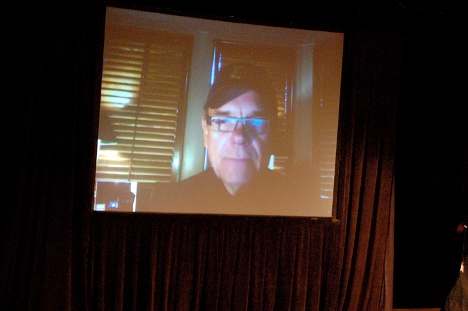 There were other good moments. Macrowikinomics co-author Don Tapscott Skype'd in to recount a list of the books he's written, in a bizarre but often entertaining presentation. Two children separately shamed the audience into rising to their feet to acknowledge their preternatural calm and polished presentation skills. And execs from GE and HP alongside academics and medical professionals were all in the mix too. All in all, a mixed bag, with not a dud in the bunch. More soon.