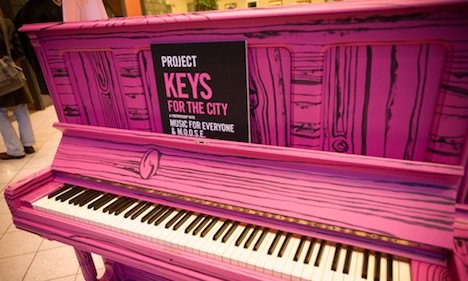 It has been a noisy summer in Lancaster, Pennsylvania, where twenty-one pianos have sat in plazas, parks, and on sidewalks for anyone to play. The pianos have been used to promote Key's for the City, a campaign launched by Music for Everyone "to foster creativity and a sense of community among the general public and to raise awareness for local music and visual arts education initiatives." 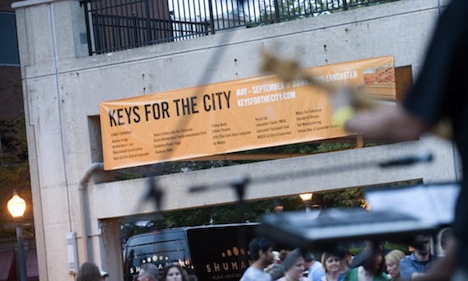 Music for Everyone partnered with numerous civic organizations on this project, and some like-minded nonprofits, including Society of Design (SOD), an offshoot of the graphic design studio Go Welsh. SOD elevated the impact of this initiative by recruiting designers, artists, and volunteers to reinvent the appearance of these old, donated pianos. Some were painted bright colors, some became photographic collages, and others were opened up to expose the guts of the instrument. Each piano has a surprisingly distinctive look that attract a broad range of curious pedestrians and city-dwellers who take turns on the pianos. Kids bang out cacophonous notes, adults work through songs they learned as kids, and many skilled pianists filled the streets with nostalgic melodies. 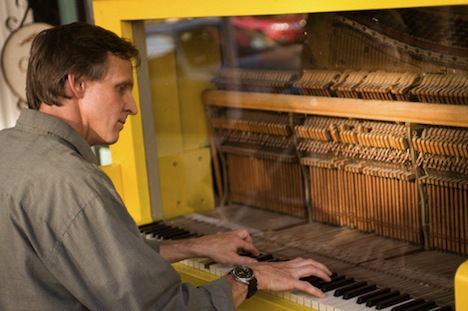 Charting the impact of this initiative will take time but several positive outcomes are obvious. Thousands of people have played the pianos this summer - some of them for the first time, businesses have enjoyed a boost (especially on Music Fridays), and dozens of musicians, artists, designers, architects, and city officials have collaborated in ways that rarely happen. According to Craig Welsh, the brains behind SOD, Key's for the City is "probably the most significant public art initiative the city's ever had take place - given the multidisciplinary nature of who's collaborated and the four month duration of the project." 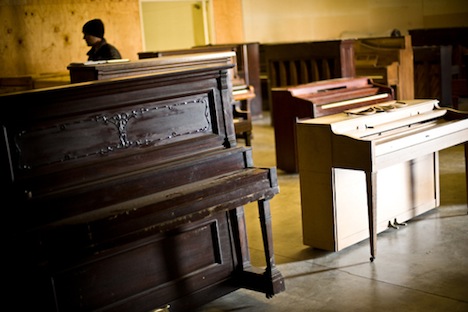 The last "Music Friday" will take place this Friday and, with the help of the pianos, it will be raucous event. All of the 21 pianos will be in Lancaster Square at the same time and at one point each piano will be playing the same song. The 21-piano salute to Lancaster is the perfect way to celebrate this initiative and end the summer. 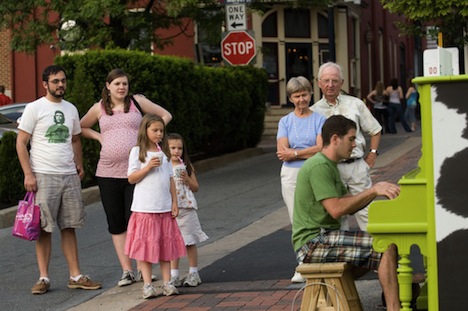 Watch the pianos in action. This video was donated to the Keys for the City project by Meteor Tower Films and FeO2.

All images courtesy of Society of Design and Keys for the City.

I'm a multidisciplinary graphic designer and writer living in New York City. My projects have involved designing identities, motion graphics, web sites, exhibition graphics, publications, as well as copywriting and art directing. I look for projects that challenge my thinking and form-making skills, but I'm especially interested in collaborating with non-profits and civic organizations that need help to address complex social problems in ways that might spur lasting social change.