The Hypothetical Development Organization gets real. 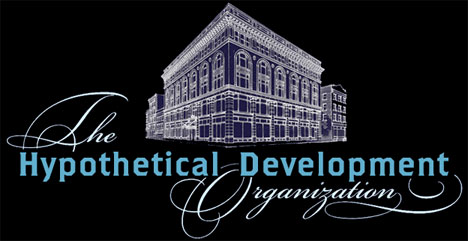 Last November, we told you about one of Rob Walker's concepts for some collective street art: Signs advertising fanciful future-use development plans. Well, now it's actually happening, under the name "The Hypothetical Development Organization...dedicated to the recognition and extension of a new form of urban storytelling." Here's the pitch:

Members of this organization begin the narrative process by examining city neighborhoods and commercial districts for compelling structures that appear to have fallen into disuse--"hidden gems" of the built environment. In varying states of repair, these buildings suggest only stories about the past, not the future.

As a public service, H.D.O. invents a hypothetical future for each selected structure. Unlike a traditional, reality-based developer, however, our organization is not bound by rules relating to commercial potential, practical materials, or physics. In our view, plausibility is a creative dead end. That is to say: We are not trying to fool anybody.

H.D.O. creates convincing renderings of these imagined future uses. These renderings are, in the tradition of the form, printed onto large signs, and shared with the public in general. Each structure selected by H.D.O. will, for a time, present to the world the fascinating potential future we have invented.

Help fund the project on Kickstarter here, and check out the site for ongoing progress.

The Hypothetical Development Organization gets real.