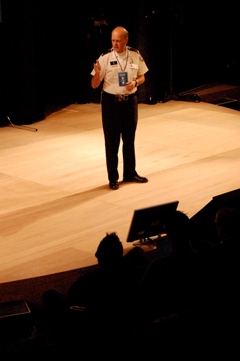 It took a moment of family trauma for Colonel Dean Esserman to figure out how he needed to transform the Providence police department. The upset arose when the police chief's son made a sad phone call from Washington D.C. to report a stolen bicycle. Esserman was pissed. Not with his son, of course (though he quickly and ruefully realized he'd be the one taking care of replacing the bike). But because it suddenly dawned on him that this type of situation epitomized what's wrong with the contemporary policing system.

"The reality is that in the post-modern era of America... we have lost the relationship with the community. When you're a victim of crime, big or small, you report it but you tell who you know. And you don't know the police any more," Esserman told the rapt audience at the recent BIF conference, a two-day celebration of often-unexpected innovation held at the Trinity Rep theatre in Providence, RI. (See also my report of some of the highlights of the first day.) So while policy wonks might wring their hands at the staggering statistics of unreported crime, Esserman saw a new story. "Crime does get reported—just not to the authorities, but to dads, moms, roommates, neighbors, pastors," he said. And that's when Esserman resolved to take action.His strategy didn't require an enormous investment in fancy gadgetry. Instead, Esserman turned to two ubiquitous pieces of technology: paper and a cellphone. He gave his officers a Blackberry phone—dubbed "the pocket cop"—and he gave them business cards with their new telephone numbers printed on them. Then he instructed them to go into the community, hand out the cards, and encourage people to call, any time. As he explained, "we are fundamentally changing the relationship with the community and changing the culture of the police dept in a good way."

For me, the real value of this story is twofold. Firstly, that innovation doesn't have to be about the latest, the greatest, the shiny and the new. Instead, real benefits can arise from a fresh application of an old skill: common sense. And secondly, that innovation really can emerge from the momentary insight of one person and at the most unlikely time. The key? To be primed and ready to understand the value of an insight, and able to translate the value of a vision into something tangible.

Many of the speakers at BIF demonstrated in their own unique ways their own open-mindedness and stubborn commitment to taking on the hard work of transforming their vision into reality. I loved Kim Scheinberg's tales of playing poker in California in the mid 1990s. Despite a tense relationship with a game she lyrically described as "sanctioned sociopathy", she resolved to use her skills to learn. Figuring that it's always best to be the stupidest person in the room, she joined a card game attended by Silicon Valley entrepreneurs at which she lost money but gained a lifelong education—and, it should be said, technology company stock options that would later prove rather lucrative. Scheinberg outlined how being close to such astonishing amounts of talent (and deception) helped to inform her latest venture, an evergreen venture fund that she has designed to be the opposite of all things poker, encouraging collaboration, not collusion, empathy not fakery.

Too often these days, conferences are little more than a cattle market, with speakers banging either a corporate or self-promotional drum in a way that ends up sounding tuneless, hollow and inauthentic and dull. BIF isn't free from self-promotion, but its small confines (about 300 people in the audience) and its friendly, lowkey vibe hums with a sense of simmering intelligence and respect. By no means was every presentation a home run, but speakers had clearly been briefed to trot out more than the same ol' PowerPoint deck and well-oiled speech— and the eclectic curation of much more than the usual faces of the conference circuit was genuinely inspiring.

John Winsor told of turning the potentially crushing disappointment of his young son into a moment of triumph. When Harry, aged 8, sent a letter with drawings of his plane designs into Boeing, he promptly received a form letter telling him, in so many words, to stuff off. Winsor blogged about his moral dilemma of whether or how to break the news to Harry. Before you could say "ooh look, a media sensation," television crews had been dispatched, Boeing was issuing mea culpas, and Harry was being flown out to get the VIP treatment at Boeing's HQ in Seattle. As Winsor told it, "an 8 year old kid draws a picture and changes corporate policy at the 28th largest corporation in the world." Now, I'm not necessarily convinced that Boeing would have jumped on this story had Harry's dad not been an influential bigwig in the world of advertising, marketing and social media, but all the same, both Winsor and Boeing were primed to take something positive from an unfortunate moment.

One other story grounded things for me, introducing a useful reminder that it's not enough to sit back and wait for serendipity to strike. Lean forward to figure out how to make the right things happen. Gerard van Grinsven was a VP at the fancy Ritz Carlton hotel chain when he was lured away from a life of small shampoo bottles and in-room dining to head up the Henry Ford West Bloomfield Hospital in Michigan. Hardly an obvious career move. But as the exuberant Dutchman told his tale, he explained that in fact he suspected that maybe his experience was just what the snarled up healthcare industry needed. By applying the lens and principles of the hotel industry to a hospital, van Grinsven and his team have created an institution that focuses on positive forces such as education, healthy eating and happiness as much as it does on surgery and treatment. "People who have no business being in the hospital come to eat there," van Grinsven beamed of his in-hospital, revenue-generating restaurants. "We've had nine wedding enquiries! Go figure!" Given that the American healthcare system will go broke unless preventive care becomes a key part of the equation, such moves are purely in the interest of the organizing corporation. Yet this is one powerful example of smart thinking from a team willing to try something different equating to good business.

Innovation doesn't happen just because someone is primed, ready and motivated. Numerous forces are necessary for scaled success. But if BIF did one thing this year, it was to deliver a forceful reminder of the role that individuals can play in creating the world they want to live in. So? What are you waiting for?