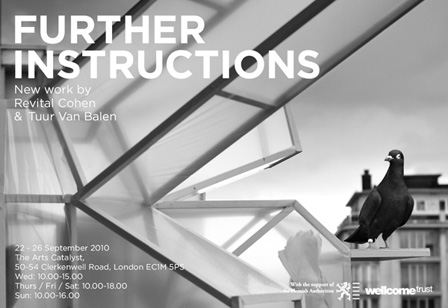 During the London Design Festival an exhibition entitled Further Instructions showcased new work by Revital Cohen and Tuur Van Balen; two designers with an interest in where synthetic biology and nano technology meets design and speculation.

The show featured two new projects, Genetic Heirloom and Pigeon D'Or and were funded with the help of the Wellcome Trust Arts Fund and the Flemish authorities. Both exhibitions reflect an approach to design that goes further than the artefacts on display and propose fragments of a future, which, although fictional, are not far-fetched. Genetic Heirloom investigates the use of tumour targeting nano-gold particles as hypothetical family heirlooms and Pigeon D'Or proposes the use of feral pigeons and synthetic biology for aesthetic interventions in urban metabolisms. 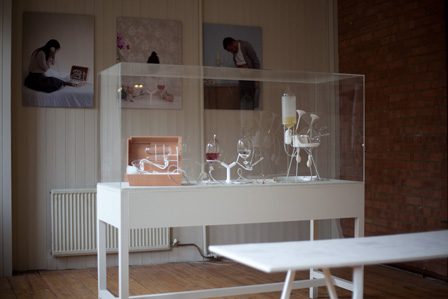 Genetic Heirloom by Revital Cohen in association with the Royal College of Art in London, explores the moral and ethical implications of inheritance and familial relationships in a time where we now have an increased availability of genetic information.

The project consists of a series of speculative heirloom objects, based on the medical applications of nano sized particles of gold and responds to the new moral codes of genetic responsibility. Each object addresses a certain issue within this context; focusing on the emotional and psychological implications of genetic knowledge. Gold and silver, much like a number of genetic cancers, are traditionally passed down the generations as inheritance. The emerging use of precious metals in medicine and especially in cancer treatment draws parallels between material heirloom and genetic ancestry. 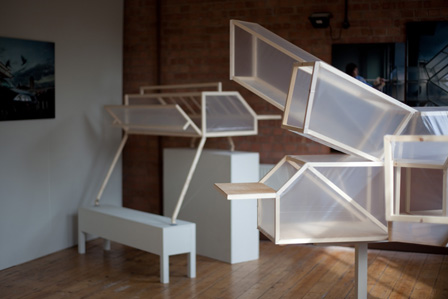 Pigeon D'Or by Tuur Van Balen in collaboration with James Chappell, explores the use of feral pigeons as a platform and interface for synthetic biology in an urban environment by attempting to make a pigeon defecate soap.

Tuur has managed to create a number of architectural interfaces that would allow one to modify the metabolism of pigeons - specifically the bacteria that live in their gut - and create a new added functionality to animals that are commonly condemned as being "flying rats." According to Tuur, the pigeons would be fed a specially designed bacteria that turns faeces into detergent and is as harmless to pigeons as yoghurt is to humans. Through the pursuit of manipulating pigeon excrement and its impact within a city the project explores the ethical and cultural consequences of designing biology.