Alternative sleeping surfaces, part 2: If you want a real Japanese futon, you'll need this tool, too

In the quest for good sleep, last year I saved up for a real Japanese futon. The real deal is thinner and fluffier than the ridiculously dense slabs that most Americans think of as futons, and I could only find one workshop in all of New York City that makes them the traditional way. In Japan futons are traditionally meant to be folded up each morning and placed in a closet, freeing up useable square footage in a space-tight country; thick American futons are impossible to fold at all.It was comfortable for about the first six months, like sleeping on a cloud, and then it progressively grew uncomfortably flatter. I remembered my time in Japan when I'd see housewives beating futons on their balconies on sunny afternoons with this unusual-looking rattan stick.

Further research revealed you're supposed to beat a real futon at least weekly, always outdoors (in case dust mites have gathered in the futon), and in direct sunlight, which is believed to kill any dusty bacteria that's gathered. Beating it both rids the futon of dust and re-fluffs it.

Not having a tennis racket or similar implement, I searched for a futon tataki, the beating stick pictured above, but unsurprisingly no one in the 'States seems to carry them. I then started looking for a traditional carpet beater, and every rug/carpet store I called treated me like I was crazy. (It is, after all, a Victorian-era implement; I might as well have been calling doctors asking if they could "leach" me.) Pottery Barn sold some fragile-looking ornamental ones that you hang on your wall, as did a boutique I found in SoHo, but both were ridiculously overpriced. 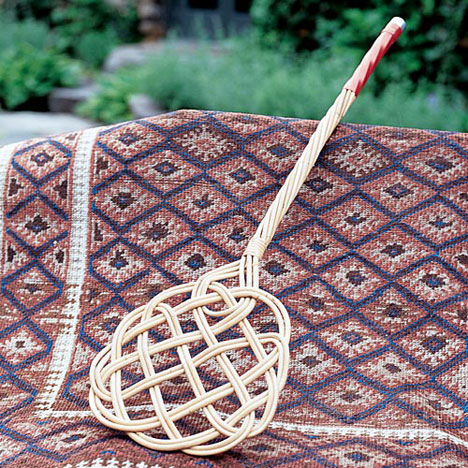 Hauling my futon up to the roof and rigging up a pole to hang it from was a chore, but worth it to beat the thing out--each blow produced surprisingly prodigious dust clouds. And now that it's refluffed I'm back to blissful slumber, but not sure if I can keep this up every week. A real Japanese futon is way more comfortable than the other kind, but it's a lot more maintenance, too.

Alternative sleeping surfaces, part 2: If you want a real Japanese futon, you'll need this tool, too