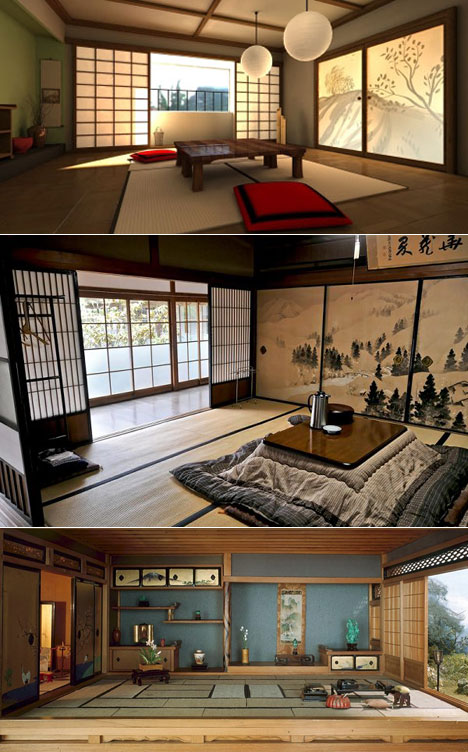 I received an interesting note in response to yesterday's post about living with a traditional Japanese futon. The author of the note, Ko Nakatsu, took exception to my oversimplified blog-ready description of why futons are folded and put away, and wanted to set the record straight in greater detail (which should be of great interest to architects and designers of environments):

The futon's fold-away function is not [just] for "freeing up useable square footage in a space-tight country". That notion is merely a benefit from the true meaning and original philosophy of a futon. The true reason for the fold-and-store-away function is so that you can create an "empty space".

By creating an empty-space, it allows for limitless potential of reasons for the room's existence. It could become a tea room, dinner room, bedroom, entertainment room... the empty room creates "potential" to be any room. Traditional rooms in Japan (which are becoming rare) often have nothing that is permanent, even the "walls" or fusuma, slide away to create a larger expansive empty-space. The people, wall, furniture, and artwork, enter and then leave the room, to return it to empty-space, full of potential.... This philosophy can often be seen in many parts of the country, from objects to culture, to even an international company like Muji ("Mu" meaning "empty" or "absence" with a hint of "tranquility" and "potential". That would be the closest translation in English. )

Nakatsu then provided a link to the following video of designer Kenya Hara (you probably know Hara's work from Muji or Haptic) giving a presentation at Google headquarters on "the meaning of Mu, or emptiness.... He doesn't talk about the futon exactly but that object still embodies the philosophies of Japan that he talks about."

(Warning for those of you at work: The vid is nearly an hour.)