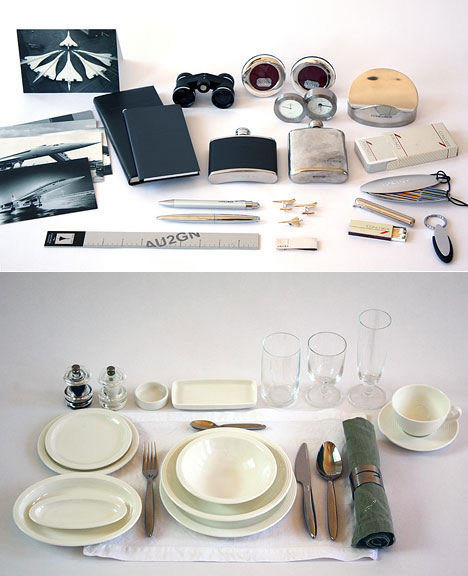 It's not an obsession and it's not quite a hobby. However, for almost two years, between 2004 and 2006, I checked Ebay nearly every day for Concorde in-flight service items. In the interim, I've amassed a substantial collection, mostly from the last British Airways fitting, co-designed by Conran and Factory Design. My friends call it my "Concorde thing" and some joke about the size of the collection (I have service for 16, including full placesettings down to the official linen napkins and placemats, plus a bevy of serving utensils, a thermos, coffee pot, creamers, salt & pepper shakers, etc.). Although I have a bunch of the official Concorde gift items, including some from earlier fittings, the focus of my collection is on the in-flight food service. After all, that's really what the experience was about.

The design direction was to bring the magic of the outside, inside.

I don't want to take anything away from the Mach 2.0 speed that had you landing in JFK before you took off from Heathrow, but the flight itself wasn't so different. It was a much smaller fuselage, with seats the size of current economy seats (though better appointed), but there wasn't much sensation of the speed—just a digital speedometer on the wall at the front of the cabin and, if you were lucky to have a relatively clear day, a glimpse out the window of the curvature of the Earth. It didn't feel any faster when you were in the Concorde—not even on takeoff. However, landing was FAST! Two quick banks after landfall and you were immediately landing. No circling for this bird.

So, the real sensation of flying the Concorde was all inside: impeccable service, good food and great wine, and by the time dessert was finished, they were already packing up for landing.When I started collecting Concorde memorabilia, I don't think I really knew why. The Conran china wasn't particularly "designy." LAN and Air New Zealand's new business class ware is much more suited to a designer's home. I'll admit that the dishes are a lot smaller than standard dishes, but perhaps that's perfectly well suited to eating lighter these days. And, there are a lot of pieces in the collection, so it supports more, smaller courses rather than fewer, larger portions. I actually hosted a 7-course Concorde dinner (and evening of travel stories) three years ago using the in-flight service items.

Besides, what's the appropriate "china pattern" for an industrial designer not interested in either having one or having something everyone else has? 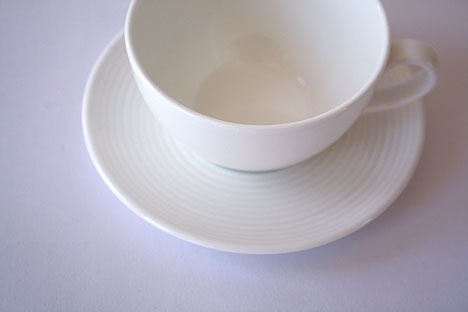 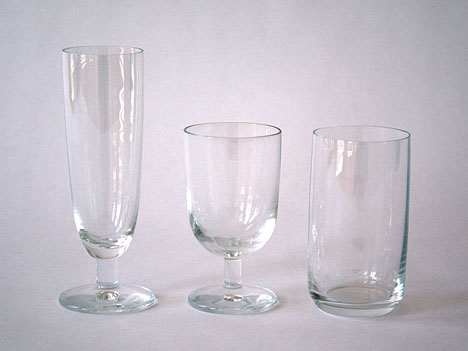 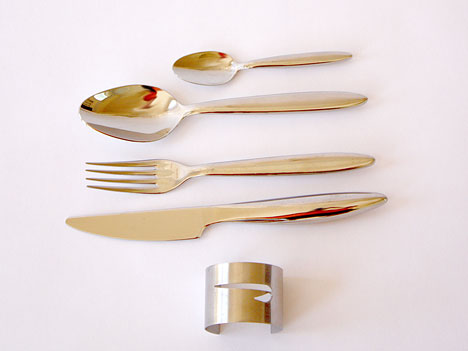 The white china is more simple than you would expect, with some subtle concentric ribs on the rim of the bowls and plates and across the entire tea saucer. They're rather plain for what most people envision for fine serving china—either contemporary or traditional. It's the small oval canapé dish that really achieves what was possible with this theme and the inspiration from the plane's fuselage. The proportion gives it an energy that the other pieces lack. The three elegant, though still simple glasses (water, wine, and champagne) by Nachtman are small (as are all commercial in-flight glasses) but are beautiful nonetheless—especially the champagne glass. The expected speed forms don't appear until you see the 4-piece stainless steel knife, fork, spoon, and teaspoon. These nicely weighted utensils contrast the china and seem inspired by the shape of the plane itself. Only the Air France Concorde letter opener surpasses the elegance of the BA silverware. As plain as the BA placesetting might look to some, it does form a nice canvas for whatever you serve on it.

The Design Manager on the refit, who worked with Terence Conran from the British Airways side, Paul Wylde, describes the inspiration and process: "The design direction was to bring the magic of the outside, inside. The cabin redesign included new seats, galleys, toilets, carpets, curtains, seat fabric, catering products, and communications." Now at Teague, directing their aviation division, he remembers that "The business case was built around a 20% weight saving. The fuel saving would pay for the investment over a 10 year period." The Concorde was special but it wasn't immune to the same concerns that govern the design and function of all aircraft. However, it's great to see another example of the issues falling into the rubric of Sustainability influencing design so directly and that the result can be successful, at least visually and experientially (the Concorde service was discontinued more than 8 years before the financial payback would have returned the savings).

One of my favorite pieces isn't even from the British Airways side, but from Air France's in-flight service. It's a simple bottle opener, much like any cheap $2 bottle/can opener combo you've seen a thousand times before, but with two simple yet significant modifications. Flare one side out to form wings and give it a 10° bend and it's instantly transformed into a lyrical icon of the iconic plane itself. It's inspired, simple, and inexpensive design and it's responsible for an otherwise $2 item now selling on Ebay for twenty times that. That's an example of the value of design. 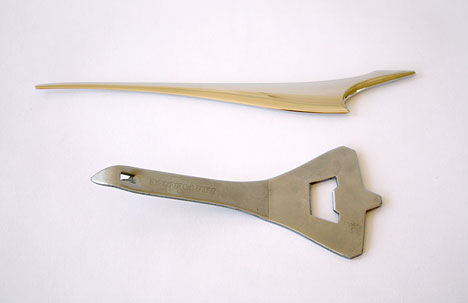 It wasn't until I was co-authoring a book on Meaning that I realized why the Concorde became my hobby. It was only within that context that I realized what drove my Concorde thing. The Concorde was one of those few iconic symbols of Wonder and Accomplishment. Sure, the people who could afford the flight had to be willing to fork over some serious money for the trip, but neither the plane nor the flight was about the expense. It was about the future.

The Concorde was a symbol of what humans could accomplish when they dared to so something outlandish and wonder-full. It was like a piece of the Moon landing that people could experience themselves. The Concorde was and became one of the last symbols of the future of flight travel as a glamorous and awe-inspiring achievement of human ingenuity. The new Boeing 787 is fabulous and efficient and a marvel, for sure, but even it's not the Concorde. It's the future of air travel but it's familiar and almost serviceable. The Concorde, on the other had, was graceful in its lines and completely looked the part of a future realized through remarkable engineering and design. Paul Wylde describes the irony of this situation: "It was the oldest plane in the fleet but commanded a perception of futurism and advancement."

Like all great design, these pieces transcend mere curio status and, in their simplicity, turn the conversation away from the dishes themselves...

Paul Wylde adds that the Concorde also had this kind of deep, meaningful impact on Britain's image of itself: "The British Public felt they owned Concorde. Conveniently forgetting the French, it symbolized all that was good about the British Pioneering spirit of innovation and courage. Everybody stopped to stare at Concorde when she flew overhead." 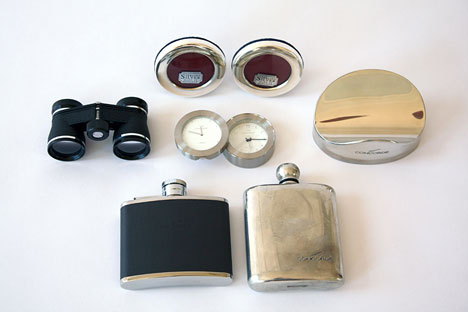 When I'm in Seattle, which is around four times a year, I still make a pilgrimage to the Museum of Flight's Concorde when I can, despite its terrible and claustraphoic choice to encase everything behind acrylic barriers—other museums have done a more subtle, better, and less expensive job of preserving theirs.

Owning bits of the Concorde experience (as opposed to the plane itself), and being able to share it with friends over good wine, food, and conversation is a fitting use for the pieces in my collection. They aren't sealed in plastic to remain "mint" but they're open for use and enjoyment the way they were meant to be on the plane. Like all great design, these pieces transcend mere curio status and, in their simplicity, turn the conversation away from the dishes themselves and, instead, facilitate a conversation about travel, wonder, and the future. I've never had a bad conversation with or about them—and that's remarkable for design objects. They bring-out the childhood wonder in almost everyone who comes into contact with them. Everyone has wanted to make a flight on the Concorde and though most haven't, everyone I've met gets a little wistful when they talk about the Concorde, as if the plane single-handedly held-up the reputation of how special flying used to be, in an era of declining service, decorum, and manners.

I don't take the dishes out nearly enough. They have become like fine china after all, more because I've been too busy to plan dinner parties, than for keeping them locked away only for special occasions. However, they never fail to inspire and instantly transport people to a different time and place—much like the plane meant to do for the future of air travel.

Nathan Shedroff is the founder and program chair of the ground-breaking MBA in Design Strategy at California College of the Arts.