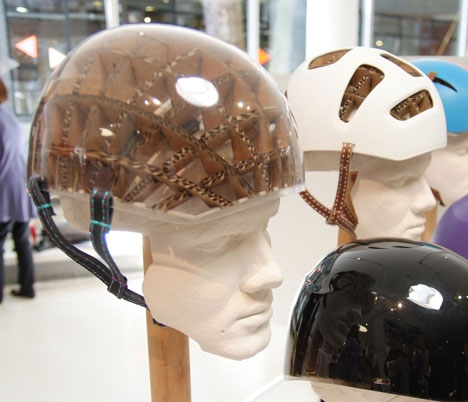 Recent RCA grad and industrial designer Anirudha Surabhi's final school project was the Kranium, a sturdy and recyclable bike helmet made from cardboard. The concept was good enough to win a 20,000 pound grant from The James Dyson Fellowship, and Surabhi's now seeking production partners.

While cardboard might not seem like an obvious choice for a helmet, Surabhi's creation is lighter than a polystyrene helmet but reportedly offers four times the amount of impact protection. The Kranium features a sturdy cardboard grid is encased in a plastic outer, but even if water gets inside, the cardboard's been impregnated with an acrylic waterproofing agent.

The following video of the Kranium at the London Cycle Show isn't very informative, but it does give you a good look at the helmet (and an example of the cardboard sheet from which they're cut):