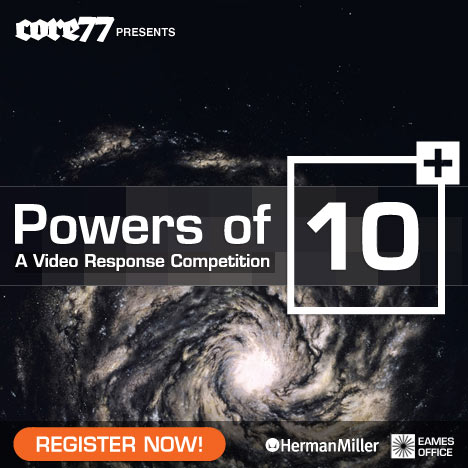 On the occasion of Powers of Ten Day (10/10/10), Core77 and the Eames Office are proud to launch the Powers of Ten Video Response Design Competition—a new design competition inviting designers to submit 2-minute "response videos" to the Eames's seminal film Powers of Ten. The videos can respond to the film in any form—from reinterpretations and mashups to tributes and reflections--with the entry period running through January 9th, 2011.

The jury includes Eames Demetrios from the Eames Office, filmaker Gary Hustwit, MoMA's Paola Antonelli, Adam Bly from Seed Media Group, Ayse Birsel of Birsel+Seck, and Allan Chochinov from Core77. The prizes are full-featured (see below) and we are looking forward to seeing some extraordinarily creative work!

The competition will be hosted on Core77's new "Design Arena" Community Challenge platform, powered by Jovoto—an open innovation platform built for community collaboration and exchange. Since the platform allows designers to "update" their entries up until the competition deadline, designers can upload storyboards, inspirations, and sketches, getting feedback and iterating their way to their final video. Designers can submit as many entries as they'd like.

At Core77, we're very excited about celebrating Powers of Ten, and want to encourage everyone to participate! Full details below.

Background In 1977, Charles and Ray Eames unleashed into the world a short film entitled Powers of Ten, one of the most influential and beloved design movies ever made. Distributed by IBM and with a running time of only 9 minutes, the film (based on the 1957 book Cosmic View by Kees Boeke and Charles' Cranbrook dialogues with Eliel Saarinen) gives a visceral sense of exponential growth by depicting the scale of the Universe through factors of 10, zooming out from a scene of a couple on a picnic blanket, to the (then) observable universe, and back down to the protons and neutrons of a carbon atom in the picnicker's hand. The film is archived by both the National Film Registry and the Library of Congress and has inspired countless designers, scientists, thinkers and doers for over 40 years.

The journey has always been ongoing: Charles and Ray made two previous versions (in 1963 and the admired Rough Sketch in 1968). In recent years, the Eames Office has made Powers of Ten Thinking a centerpiece of its education—centered around the notion that "Scale is the New Geography."

Task Definition In this iterative, exploratory spirit and on the occasion of Powers of Ten Month, Core77 and the Eames Office are proud to invite you to create a "response video" to Powers of Ten, limited to 2 minutes, celebrating this seminal work in any way your creativity leads—a reinterpretation, a mashup, a tribute, a reflection, a love letter.

Note: The competition platform invites iteration—you have the ability to update your entry at any time up until the competition deadline—so posting storyboards, inspirations, and other materials early is encouraged. This will invite people to comment on your work, offer inspiration, and help build a collaborative community. Post, share, refine, engage!

Prizes Jury Prize Winner: $2,000 cash Eames Molded Plywood Lounge Chair (Value $1250) $2000 donation to the Eames Foundation in the name of the winner (includes a tour of the Eames House; travel not included) In addition, to watch and read from their Eames chair, the Jury Prize winner will also receive: A boxed set of volumes 1 through 6 of the Eames Films--including of course Powers of Ten, among over 40 films A vintage copy of the Eames Office book Images of Early America The recent 100 Quotes by Charles Eames An Eames Primer by Eames Demetrios

Sponsor We are grateful to Herman Miller for helping to make this competition possible.

This initiative is a Proud Participant in 10/10/10 - Powers of Ten Day 2010, organized by Eames Office & generously sponsored by IBM, with additional support from Herman Miller, Vitra & Penfolds. Find out how to participate each year at www.powersof10.com