Shape Changing is Real: Blob Motility by the Wakita Lab

A friend of ours loves to joke that the future will have no hard edges; experience will be defined in pastel-colored gels, foams and mists that deliver your voicemail and bring you milk. Probably to his dismay, this new project from the Wakita Laboratoray at Keio University may one day prove him right.

Blob Motility is an early phase of a new "actuated shape display using programmable matter." With it, A gel substance can be programmed to a specific geometry and topology, resulting in organic shape-changing in real space—not unlike a "metaball" in computer graphics, as the lab points out. The hardware is composed of electromagnets arranged in a honeycomb structure underneath, with control circuits that create a dynamic magnetic field. The blob, a magnetic fluid known as "pBlob," responds to this field, changing shape in response.

For a demo of the magnetic non-organism that will one day float you to work, see the video above. They explain a little bit there as well, but to get the full story, including the method of blob creation, mechanism details, the language of transformation control, and proposed application, you'll have to wait until the International Conference on Tangible, Embedded and Embodied Interaction in 2011, where the design team will present their work. 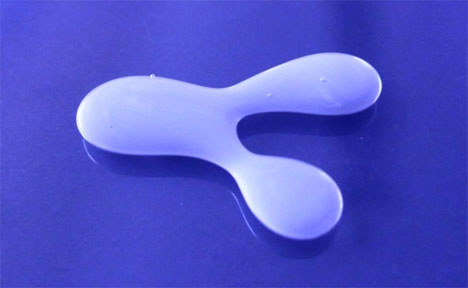 Shape Changing is Real: Blob Motility by the Wakita Lab