Can Americans cut back? "Use it up, wear it out, make it do, or do without" circa 1943, and how World War II indirectly led to bikinis 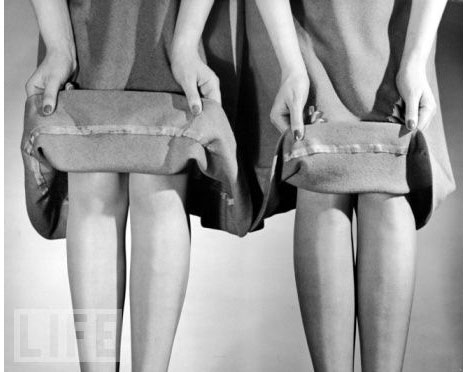 I don't think of us Americans as people that are good at cutting back. I also feel like recycling wasn't something that we even considered until the 1970s. But I recently read something rather surprising.

It's well-known that during World War II, American industry stopped making consumer goods like cars and started making Army items like tanks. As Rick Atkinson writes in his excellent "The Day of Battle: The War in Sicily and Italy, 1943-1944 (Volume Two of The Liberation Trilogy),"

The Rudolph Wurlitzer Company now made compasses and de-icers instead of pianos and accordions, International Silver turned out Browning Automatic Rifles rather than tableware, and various lipstick, typewriter, and hubcap manufacturers produced, respectively, cartridge cases, machine guns, and helmets.

What I was more astonished to read was the amazing amount of recycling and rationing that Americans undertook in the name of the war effort. Up top is a photo of hemlines on women's skirts reduced by government mandate from three inches to two in order to save wool for the troops, a relatively minor sacrifice that reaped enormous material benefits. As Atkinson explains,"Use it up, wear it out, make it do, or do without" became a consumer mantra. Plastic buttons replaced brass; zinc pennies supplanted copper. To save fifty million tons of wool annually, the government outlawed vests, cuffs, patch pockets, and wide lapels; hemlines rose, pleated skirts vanished, and an edict requiring a 10 percent reduction in the cloth used for women's bathing suits led to the bikini....

Nationwide, the speed limit was thirty-five miles per hour, known as "victory speed." A government campaign to salvage toothpaste tubes--sixty tubes contained enough tin to solder all the electrical connections in a B-17 bomber--resulted in 200 million collected in sixteen months.... Elaborate charts informed Americans that 10 old pails held sufficient steel for a mortar, 10 old stoves equaled 1 scout car, and 252 lawn mowers would make an antiaircraft gun.

I suppose it's a lot easier to recycle and cut back when your fathers, brothers and sons are getting shot at, and you can see a direct correlation between your consumption and their safety. It's just a shame that it took a World War to implement those types of recycling policies, and that after the war we launched into several generations of conspicuous consumption. "The country had heaved itself from the ways of peace to the ways of war, galvanized as never before," Atkinson writes of that wartime period, "and perhaps never again."

Can Americans cut back? "Use it up, wear it out, make it do, or do without" circa 1943, and how World War II indirectly led to bikinis