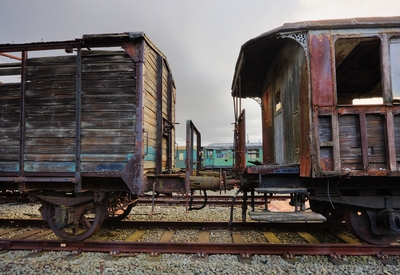 While in Europe recently, we couldn't help but notice the narrower streets, the increased volume of pedestrian traffic and the incomprehensibly more efficient rail system. So far we have talked principally about sources of inspiration, but we would be remiss to neglect the discussion of historical precedents and structural constraints. As authors like Jared Diamond and Richard Wright have rightly observed, a variety of factors shape both the location and timing of revolutionary insights. European infrastructure, with cities reliant on foot and animal traffic, lent itself to narrow streets and non-orthogonal city plans, while massive public road projects in the (then) less-developed New World paved the way for the multi-lane roadways that spawned drive-in "cuisine." Even the seating arrangements in modern cars weren't structured to be the most effective possible location for a driver, but instead a consequence of the legacy seating arrangements of carriages dating back to the Roman era for the British Empire and carriage wagons in the 18th Century for everyone else.The term inspiration is derived from the same source as "respiration," and its etymology relates to the divine spark of life breathed into humanity, thought to come from God. In the modern context, however, inspiration is usually spoken of as found in the physical world, as in "today I was inspired by ..." That said, society retains some modicum of reverence for those who bring something new to the world. After a long enough time, however, even the magical can become mundane—the span between Gene Roddenberry's tricorder on television and the introduction of the Motorola "Star-Tac" flip phone was a scant thirty years. Now even the once-futuristic Star-Tac would seem clunky and cumbersome.

The inspired creations of the past inextricably march into the banal fabric of daily life. Since society builds on our prior accomplishments, each act of inspiration and innovation builds the structure in which human beings work, observe and innovate. In other words, the iconic form factor of the Star-Tac spawned the sleeker and equally successful RAZR, but the success of those two products wedded Motorola to the clamshell form even as other manufacturers such as Apple and Research in Motion began focusing on interaction design rather than physical grace. Consequently, Motorola's similarly named follow-up products were far less successful, though similarly named.

Inspired products imply a disruption of current modes of thinking. Creating them requires seeing the world slightly differently, whether by applying knowledge from disparate fields, or by exploring parts of the world we don't take for granted. Observing one's own industry and competition may promise innovation, but to truly be inspired, creatives ought to discard their preconceptions and explore other fields, as we have indicated in prior articles, or leave their comfort zones and explore the world. Artists from Hemingway to Picasso have often made their best work while living in countries other than their own. Though toiling away in a basement laboratory is certainly one way of disassembling the world, we encourage you to follow suit and embark on an excursion to a new place full of eye opening insights.