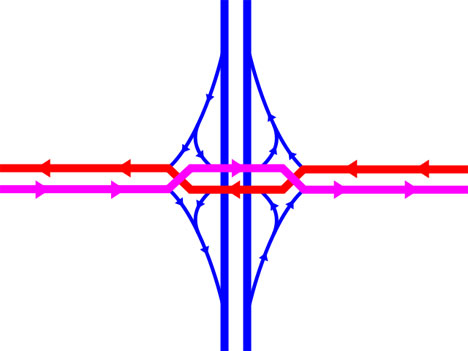 When I used to have a car in Manhattan I considered myself an expert at navigating the traffic sprawl, as I knew the city like the back of my hand and could usually work my little five-speed VW to the front of any pack. I'd often joke to my friends that Manhattan, due to all the one-way streets and congestion, was a place where you could often get to your destination faster by initially moving in the opposite direction. (No one ever laughed.)

The concept of going the wrong way to reduce overall trip duration can also be seen in the "diverging diamond interchange," a new (to the U.S.) form of highway intersection that reduces "conflict points" by asking drivers to temporarily switch to the "wrong" side of the road. It's kind of complicated, but see if you can follow along:

...The diverging diamond interchange allows for two-phase operation at all signalized intersections within the interchange. This is a significant improvement in safety, since no left turns must clear opposing traffic and all movements are discrete, with most controlled by traffic signals.

Additionally, the design can improve the efficiency of an interchange, as the lost time for various phases in the cycle can be redistributed as green time; there are only two clearance intervals (the time for traffic signals to change from green to yellow to red) instead of the six or more found in other interchange designs.