Back To The Futures - Looking Back at Corporate Futures 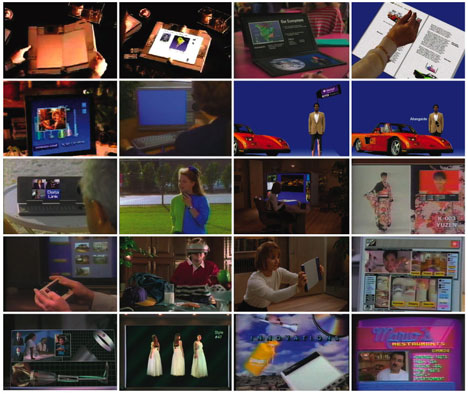 A range of products as envisioned by technology corporations such as Philips, AT&T and Apple

Chris Woebken, a designer based in Brooklyn, will be screening 'Back To The Futures' as part of the 'Between-Between' exhibition at Studio Between, a design studio set up by a group of graphic designers in London. The exhibition will showcase 12 young designers and design studios from around the world and opens on Saturday, October 30th and runs until the 4th of November.

The film reel amalgamates corporate future visions created during the 80s and 90s by various Silicon Valley tech giants such as Apple, Motorola, Philips, AT&T and Pacific Bell. Chris, in collaboration with Natalie Jeremijenko at XClinic, originally found the clips on YouTube, then dubbed them together, back and forth, onto a Back To The Future VHS rental tape, producing an even noisier aesthetic and soundtrack. Nice touch. This is a 'found' artifact that reflects on how corporations from the 80s used their R&D time to try and communicate their future ideas for 2010.

For those of you not in London, you can watch the film here on Vimeo

While watching the 1 hour and 30 minute-long tape, it's difficult not to laugh at how preposterous these visions have become over time, with the implication that similar predictions made today, by start-ups and mega corporations, are projecting futures that will be so entertainingly incorrect.

Yet, at the same time, it's clear that these huge companies with huge budgets spent weeks trying to figure out the best way to communicate their predictions, and optimistically hoped that their investments would be fruitful. Perhaps because predicting and envisioning a future or a range of futures is a way to encourage others to blindly jump on board and put their faith (and of course, their money) towards creating that future, yet knowing deep down, the unexpected is only round the corner.

Its well worth a look, offering the great power of hindsight, illustrating how these influential technology giants envisaged our lives in 2010.

Back To The Futures - Looking Back at Corporate Futures