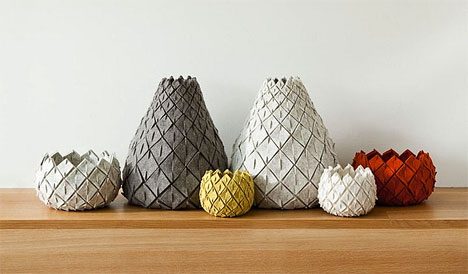 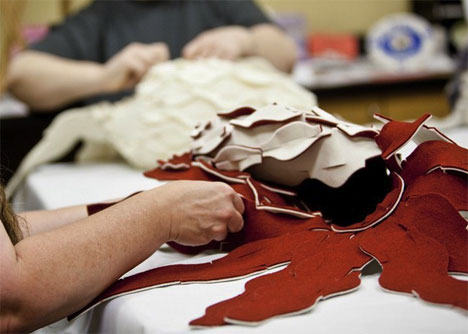 Top: A lineup of products from CraftedSystems. Bottom: Producing the work at a local YWCA.

Designer Aurelie Tu, formerly the head of women's product at NikeVision, Timing and Technology, has left the comfort of the mega firm to found her own modern craft studio, CraftedSystems, a line of housewares made from modular pieces of felt—floor and table coverings, vessels, lights, and more. All of the pieces combine geometry with the unique 2D and 3D qualities of felt to deliver remarkable forms. But more amazing than the products themselves is the innovative production-line of Tu's business. Instead of outsourcing production of her products overseas, she teamed up with the YWCA women's shelter in Portland, OR to engage women-in-transition with skills development and the healing work of craft.

I caught up with Aurelie to chat a bit about the founding of her business.

Xanthe Matychak: What inspired you to start your own business and what were your desires going in?

Aurelie Tu: Throughout my professional life, I've often thought of starting a business. Being able to build a company that embodies values and concepts that you embrace is liberating, and can present different levels of fulfillment than simply having a job.

A lot of things inspired the thought of creating CraftedSystems, including design, sustainability and social consciousness.

It was inspired by the desire to: create a company which uses design to benefit others; create a lab which fuels materials experimentation and innovation; create a new method of delivering product via alternative labor sources; and blend high tech design methodology/practices and low tech/handcraft.XM: How did you make the shift from designing electronics and consumer products at global firm like Nike to striking out on your own to found a modern craft studio?

AT: On a professional level, I was in great position with Nike, heading up the women's product for NikeVision, Timing and Tech, from both the US and European headquarters, and was working deeply in this consumer focus of women, which has been an ongoing focus throughout my whole career, having typically often been the only female in the design studio and being the obvious candidate for designing women's product. Having designed largely electronics and consumer products in my career, I found myself wanting to reinvigorate a latent love for beautifully handcrafted product using natural materials. I have always put more thought on deeper levels to the concept of women's product, and, in CraftedSystems, have in effect turned that around into 'women's work,' using women's talents and aptitude for detailed work and bringing historical or indigenous/foreign concept of 'women's collectives' into western modern society, and introducing the notion that "healing work" can also be monetizing.

XM: CraftedSystems is this wonderful blend of craft and hi tech. How did you arrive at this combination of process for your product line?

AT: I was living in Amsterdam at the time, surrounded by Dutch design at its peak; wonderful levels of creativity and a level of independence and entrepreneurialism in designers which is very different from in the US. There is a unique blend of high tech and low tech, old world and new world in their work, which I found very inspiring and again refreshing from American design. 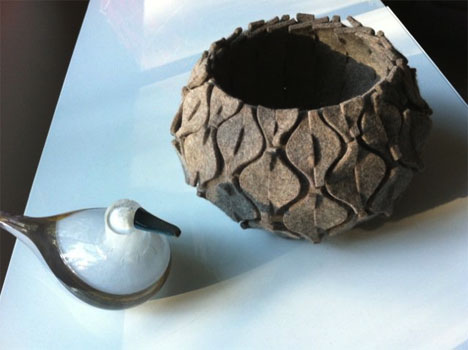 XM: You could have outsourced assembly of your products overseas. Instead, you partnered with women from the YWCA in your local community. How did you find the right people to work with?

AT: I had been wanting to give back to the community and was involved in opening the first chapter of Architecture for Humanity in Portland. I began looking for women's organizations to partner with and the YWCA was the perfect organization; they provide programs for transitional women, are fairly well organized and have at least one presence in almost every city. This makes it possible for this project to scale and expand geographically when needed. Local production could occur closer to the final destination, and local YWCAs could benefit with projects in their cities.

XM: You left a comfortable industry job to found your own business. How was that process? When was the point that you realized you had to quit your day job and what were your feelings throughout that time (I ask this because I suspect there are a lot of women out there who would like to start their own business but are afraid to make the leap).

AT: I left Nike when I had my daughter in Amsterdam. The organization was in the midst of restructuring as well, so it was the perfect point to step away and focus elsewhere. Â I had a fantastic time at Nike; it is a great place to work. I grew a lot professionally and appreciated the amazing talent there, but there are also other goals that I have for myself, and in order to grow as an individual, sometimes change is necessary. As of today the group unfortunately does not exist, and the division looks very different to how it looked 3 years ago, so the decision to step out at that time was the right one.

XM: So, you were involved with the opening of an Architecture for Humanity branch in Portland. Clearly, this kind of systemic approach to problem solving, an approach that turns traditional social and economic models on its head, is something that you are drawn to. When you look around at the things like the "green" movement in design, are you seeing this type of systemic change yet? If so, by who? Or are you seeing more, small token gestures toward change? And if this is that case, how do you feel about those small gestures?

AT: I feel design is a practice that can be an advocate for change, no matter the organization. The A4H branch I was involved with was for Portland. It is amazing when something like an A4H is proposed, how many people appear who are willing to tirelessly volunteer time to helping out. Today we are able to create our own rules and operate outside of the proverbial "box" because the same rules do not apply anymore. There are so many companies doing good in large and small ways; token gestures are a minimum today, and writing sustainability and social or community consciousness into the guidelines for companies is definitely becoming more commonplace. People today want to know more and want to embrace companies that care. They do a lot more research on companies because information is available to them on the Internet. In this day of consumerism, people seek meaning in and define themselves by the brands they use. If that brand contributes in a positive way, they feel good about themselves.

XM: Can you tell us more about the process of bringing in women from the YWCA. Who did you pitch to? Or did enter that culture in some other way. Also, do you have any stories to share about the women who assemble the products. How they feel about the work or the objects?

AT: It was actually a very simple process. I spoke with the director of the Transitional Opportunities Program and introduced the concept to her, then gave a presentation to the staff. As the YWCA serves as a transitional shelter and resource for women, they are constantly in need of job opportunities for placement. They also are trying to come up with alternative business models, such as income-generating ones owned/operated by the local YWCA, but I'm not sure how successful those have been. The CraftedSystems project is so perfectly suited to them, it almost seems like it was designed for them. It's perfect from so many angles: first, "craft" night (they have organized activities for the women, some of which are volunteer) is the most well-attended activity, showing that the women like to do things with their hands and be creative. Second, its widely known in therapeutic circles that repetitive, productive handwork is "healing". Third, it can benefit lots of women, as they cycle through the Y every 3-6 months, thus the chance of having the exact same women working on it for an extended time is unlikely (although some have expressed such interest that they would come back for more weaves). I chose the Y specifically because it is expressly for women (this project is entirely a women's project—it's really about women's work), and there is a Y in every major city. This is intentional so that if the project had to scale or there were a specific installation to make in a specific city, we could work with the women in that local city and thus be closer to the source, possibly reducing carbon footprint for shipping, etc, and benefit that local women's community.

We just did a couple weaves last week, and I have to say, I was really happy with the women's response to it. They completely understood the concept, and were so thrilled that I would trust them enough to have them work on this. They also mentioned the word "healing" and "meditative" and felt it was a relaxing thing to do. Money seemed to be a distant secondary priority, as one mentioned she would come to do it anyway even if it weren't for pay. And the women are sooo proud when they complete a piece. They invite people in the hallway to admire them, and several have taken pictures to send to their friends and mothers.

XM: What is your relationship with the women who assemble crafted systems. How do they feel about the work or the objects or you as an entrepreneur and businesswoman?

AT: They are so appreciative and really feel good about the project and really respect what I am doing. I think it's actually inspirational to them to see someone doing this voluntarily, and I believe it helps them feel valued and improves their self-esteem. 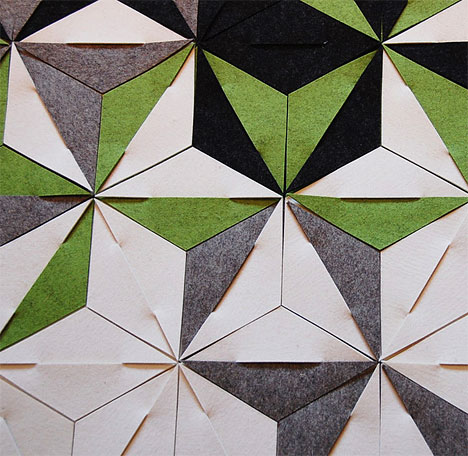 XM: Tell us about your inspiration for the products. You mention that design work that combines the old with the new inspire you. Can you drop a few names of objects or processes that have a great influence on your work?

Aurelie's systems approach to founding her own product line is truly inspirational, an approach that considers not only the needs of her consumers, but the needs of people in her community. Check out all of CraftedSystems here.