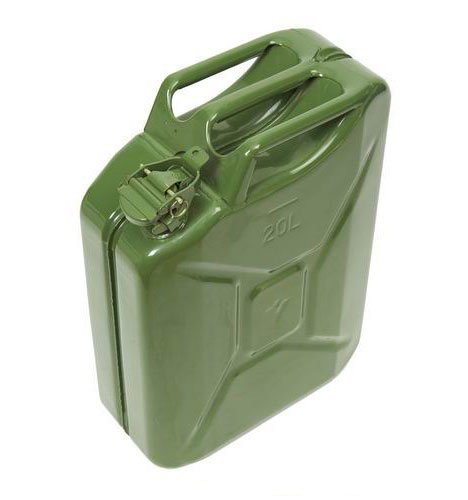 While the Allies of World War II certainly had the moral high ground over the Axis, it's almost embarassing to see how far the former was behind the latter in terms of industrial design. A good case in point is the object that today is known as the Jerrycan. ("Jerry" being Allied slang for "German." The can was originally called Wehrmachtkanister.)

Armies need fuel, among other fluids, and when war broke out in 1939 the Brits (and later Americans) were toting fuel in flimsy, flat-sided pressed steel containers like this: 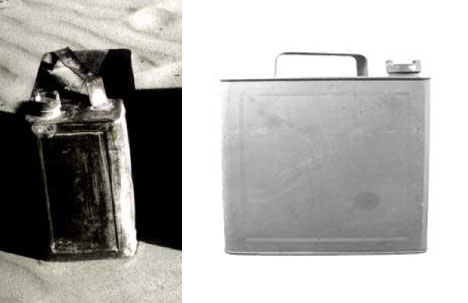 The flat sides were all individually welded together at the edges--labor-intensive--and the decidedly un-ergonomic sharp-edged handle was a single piece of bent steel. You needed a wrench to attach and remove the cap, a funnel to fill the container and a spout to empty it. The containers held four Imperial gallons and tended to leak at the corners, where the welds would fail, and the containers became colloquially known as "flimsies."

In contrast, the Germans had fuel cans that looked and performed like they should be in the freaking MoMA. 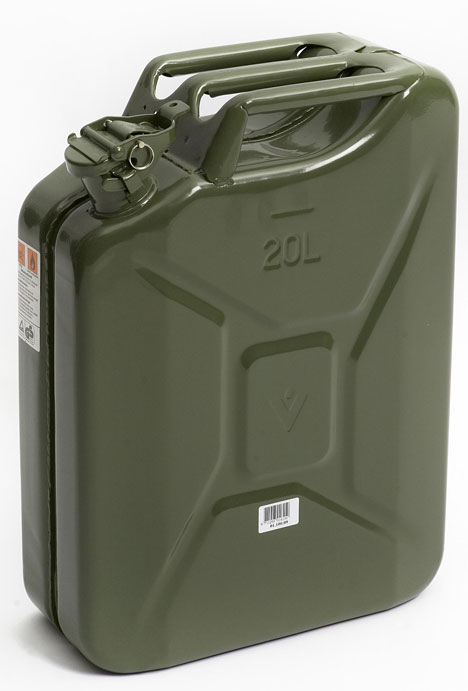 The German design, which dated to the 1930s, was made from two pieces of pressed steel that slotted into each other and needed just a single weld around the "equator" where they met. The sides had indented ribs to add strength. The rounded corners meant no weak welds and hence no leaking.

The caps could be opened and closed by hand, no tools necessary, and the extended neck meant you could pour without a funnel in a pinch. Each can held an even 20 liters, making it easy to calculate bulk amounts (whereas the Brits had to multiply everything by four). There was even an airpipe leading to the air pocket above the spout and below the handles so that the contents would pour smoothly.

Most interesting of all are those handles, which are rounded, and of which there are three.

Why three? For two reasons: One, when a soldier placed two cans side-by-side, the handles on the edge of each can touched and could be used as a single big handle, meaning one person could carry four cans. Two, think about unloading a bunch of these off of a truck, how would you do it? The extra handles on the side meant it was easy to make a bucket brigade line of troops and neatly hand cans off to each other. 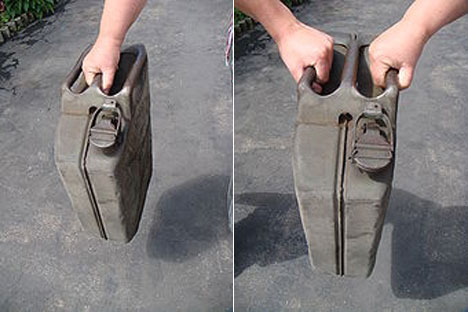 A German sympathizer to the Allied cause reportedly gave an American engineer the manufacturing specs of the Jerrycan as early as 1939, but when the plans were shown to the Allied brass, he was ignored. The higher-ups were not interested.

Allied troops on the ground, however, recognized the superior design of the cans and readily used captured Jerrycans. Later in the war the Allied brass would finally order that the Jerrycans be duplicated in five-gallon knock-offs. The Germans presumably had other things to worry about than intellectual property violations, and the Jerrycan became standard Allied kit. As you can see below, by 1944 they were cranking them out like Gucci purses on Canal Street. 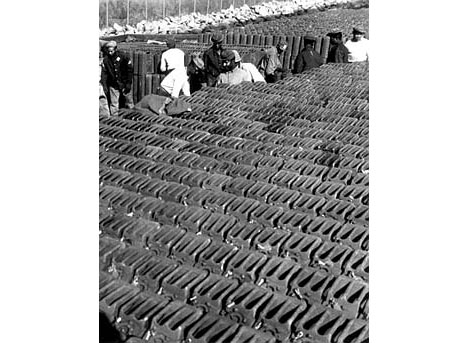