In this sixth and final entry in our series Dogs on Design, writer Sarah F. Cox visited Connecticut this summer to meet the two viszlas lucky enough to run around Winterhouse with Bill Drenttel and Jessica Helfand. 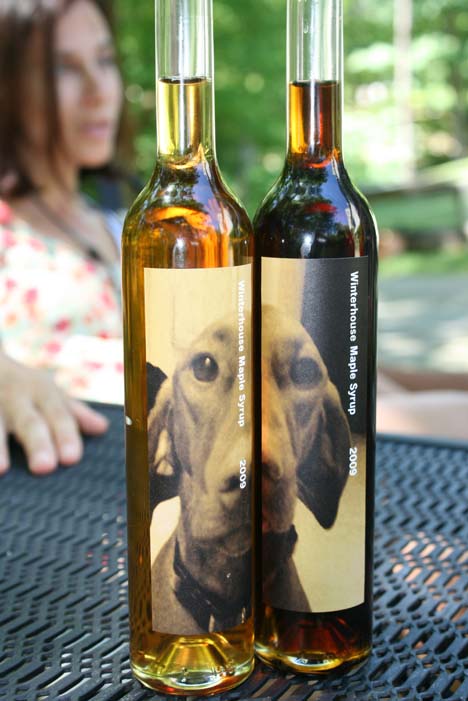 Maude and Ruby lent their likenesses to the label of last year's Winterhouse maple syrup.

I first wrote to Bill Drenttel over the summer asking to meet the Winterhouse dogs—two vizslas named Maude and Ruby. Despite the fact that I could only visit on a holiday weekend, he invited me out to Winterhouse headquarters in Connecticut to meet him, his wife Jessica Helfand, and the two beloved family pets. "Like Winterhouse, [your visit] will be a family affair," he wrote in an email. This was an understatement. After more than an hour on the back porch on a hot July day, I'd met Jessica's visiting parents, Bill and Jessica's children—Malcolm and Fiona—the two dogs and two rabbits. The family dressed the dogs in Halloween costumes, demonstrated a dog conga line, and sent me off with homemade maple syrup bearing Maude and Ruby's images on the bottles. At the time I assumed I'd caught a unique glimpse of the Drenttel/Helfand team unguarded, but I was delighted to see that Bill Drenttel was just as dog-obsessed the next time I caught up with him; at an SVA lecture in New York City. His opening slide in an hour-long presentation was one of his puppy in a sweater. For Winterhouse, design and life begins with the dogs. 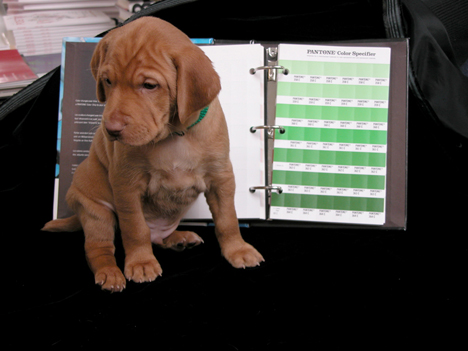 But what is a life in design about? Drenttel attempted to answer this question at that NYC lecture by taking students through the many phases of his career. The Winterhouse team (the husband and wife currently have a staff of three more employees) has completed such high-profile projects as the redesign of the New Yorker website, the trophy for the National Design Awards, and the design for a series of Susan Sontag's books. Yet Drenttel maintains that, "design is a family business and the world is small." Ruby and Maude, who are mother and daughter, agree. 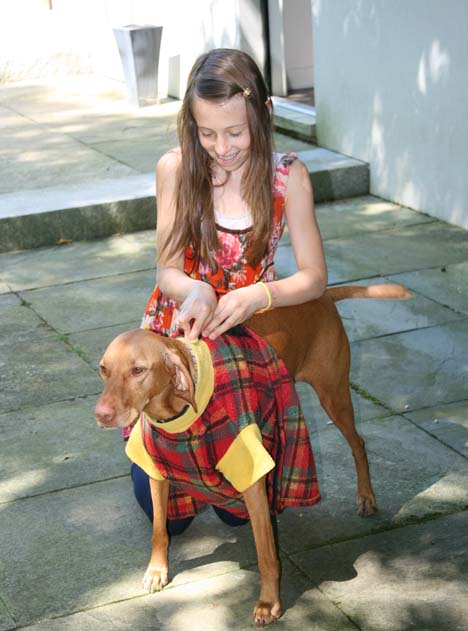 Fiona helps her dog get into costume last summer.

When it came time to select a breed of family dog, Drenttel was unapologetically snobby " I would not have a rat of a pet." he proclaimed, which meant no little dogs. So they got their first viszla, Ruby, and when she had six puppies they kept Maude too. Drenttel describes the vizsla breed as "like a weimaraner but red and from Hungary not Germany." Perhaps this helps him justify the William-Wegman-imitating desire to dress the dogs in costumes. 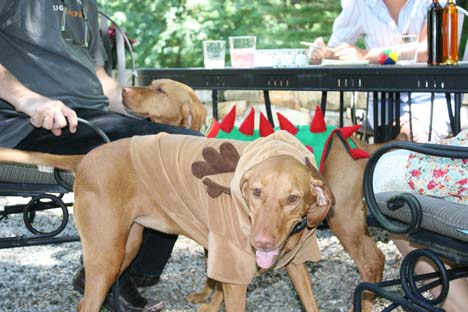 Drenttel and Helfand describe their viszlas as the perfect designer dogs since they are pretty, don't shed, and love all the Winterhouse visitors. Which is not to say that they are prefect all-round pets; Maude officially failed obedience training and is known to always have something in her mouth. But in their design careers, Drenttel and Helfand uphold high standards nonetheless.

Though the couple left New York, you get a sense Jessica Helfand resists the stereotype of being a Connecticut mom. Though she may sometimes shop for groceries in BJ's, she brings her critical eye along. Just before the Fourth of July weekend, she found her favorite sign of bad American taste: a chip bowl, shaped like a flip-flop and decorated with stars and stripes. She shudders recalling the horror, then laughs. As the founders of the blog Design Observer (along with Michael Bierut), the couple are not just picky, but professional purveyors of taste. They claim they won't work with anyone that does not like dogs, or has bad taste in coffee. I certainly believe them on the first account. 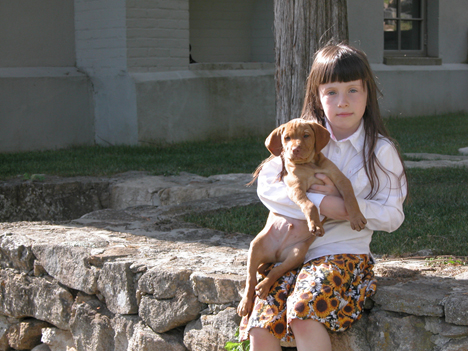 A young Fiona holds Maude as a puppy.

The Winterhouse property is the kind of place where dogs roam freely through the woods and cell phones don't work. Maude and Ruby run around unleashed and unfenced enjoying the fresh air and plentiful trees. You can tell they are satisfied by the ability to act on instinct, and it's this philosophy that has rubbed off on their happy humans as well. "There is something instinctual about our design practice," says Drenttel. The way the team has made career decisions has been largely based following opportunities much as dogs hunt. Though Drenttel describes himself as an urban animal, the timing was right to move to Connecticut and he has since adapted happily to a life of rabbits, trees, and yearly syrup making.

As Bill was leaving the New York lecture he joked that his Dogs on Design profile would ruin his reputation. It would seem he's known as the more sober character of Winterhouse, while Helfand—who had a big fat bunny on her lap for most of the July interview—is immediately open and friendly. But you can't hide the truth when you are petting a dog dressed up like a dinosaur; design hard-ass or not, Drenttel has a soft spot for puppies; cat people need not send design resumes to Connecticut. 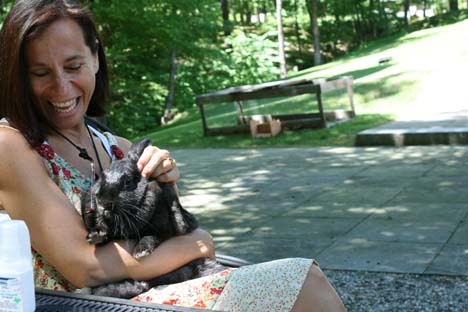 Jessica Helfand and one of the two pet rabbits.

Though Sarah is retiring the Dogs on Design series after this post, she'll still be busily blogging on Raleigh Pop when she is not working on her thesis for D Crit. She is graduating next May and looks forward to spending more time with her own dog. Also, though she is partial to smooth coat fox terriers, Sarah will be covering vizslas and weimaraners once again for the 2011 Westminster Kennel Club Dog Show in New York.