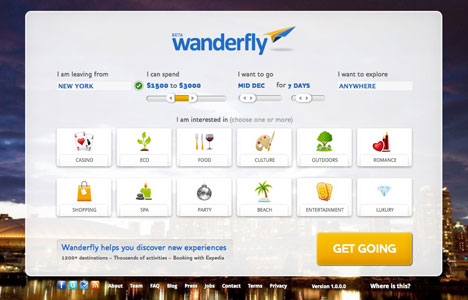 Much has been made of improving the design of the travel experience, typically focusing on the actual transportation part; but when it comes to the planning phase of a leisure trip, user experience design has been notably absent.

A new website called Wanderfly aims to change that with a well-designed interface that considers the way people plan trips. Equal parts travel agent, ticket-seller, world-traveling friend and source of travel inspiration, Wanderfly seeks to get you and your suitcase out of the house with minimal hassle.

Sometimes you want to go away, but don't know where you want to go. Wanderfly makes you aware of the possibilities with a simple welcome screen that lets you punch in what you do know: Where you're leaving from and a budget range, letting you set bookends anywhere between $200 and $5,000. Then you enter a rough time window of travel, i.e. mid-November for two days, or next January for 3 weeks. 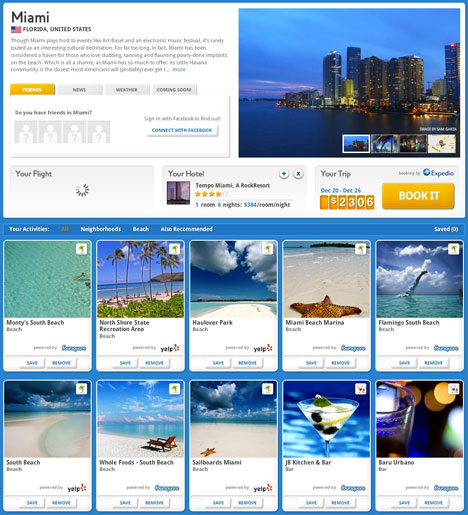 Next, if you know where you're going you can punch in a specific location, whether it's Portland, Portugual or Port Elizabeth, South Africa; if you haven't decided on a specific site you can choose from a variety of activity icons like "beach," "outdoors," "culture" et cetera, and the website's engine produce recommendations with thumbnail photos. Facebook connectivity even tells you if you have friends in whatever region comes up.

There's even a blog-like Featured Inspiration section that highlights different areas around the globe, for those of you who aren't ready to book a trip but need a five-minute break from your cubiclemates. 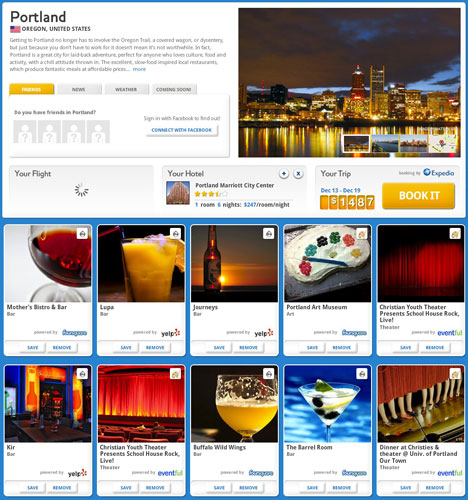 The design of the site is well-considered in terms of both visual layout and interface. Says Wanderfly co-founder Christy Liu, "[It can take as few as] five clicks on Wanderfly from search to booked trip; it's double digits on most other travel sites, with some of them approaching 20 clicks." Not to mention other sites often force you to wade through calendar grids, enter highly specific travel dates, and are about as visually compelling as an AT&T bill, compared to Wanderfly's looks-like-it-should-be-on-an-iPad aesthetic. Check it out here.