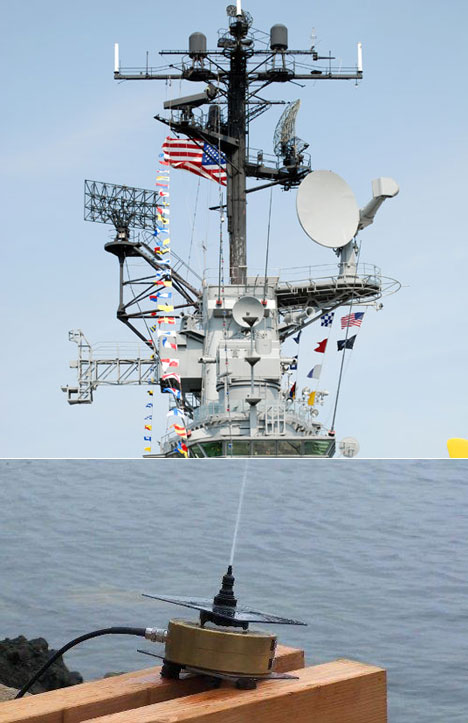 The U.S. Navy is reportedly experimenting with replacing their bristling shipside antennae arrays with another material: Salt water, shot up into a fountain. The Electrolytic Fluid Antenna, as it's called, is apparently workable and the Navy is even seeking to commercialize it.

Sea water is pumped from the ocean into a stream and the width and length of the stream determine the frequency capabilities. An 80-foot-high stream could transmit and receive from 2 to 400 mHz with a relatively small footprint. The Sea Water Antenna is capable of transmitting and receiving VHF signals and has been tested at a receiving range of over 30 miles.

The antennae needs of a typical Navy vessel with 80 metallic antennas could theoretically be replaced with only 10 Sea Water Antennas of varying heights and streams to cover the same frequencies. The technology could potentially be used on land with salt-supplemented water, replacing large unsightly antenna towers with fountains. Another use could be as a solar- or battery-powered emergency antenna system for watercraft.

Pretty wild. If this takes off, it could turn The Bellagio into a major broadcasting center. It would also be awesome if they could adapt the technology to replace cell phone towers in those towns where nobody wants the ugly tower in their backyard, and they instead replaced them with picturesque geysers.