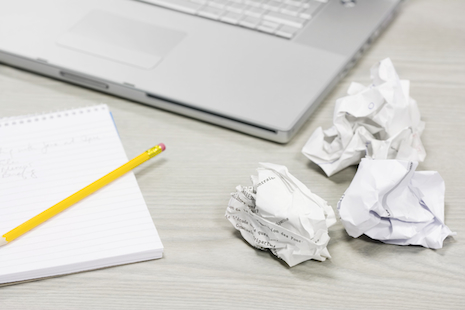 We here at Core77 were recently asked by an aspiring designer to explain the two or three biggest time wasters and mistakes a beginner might make. While the old adage "measure twice, cut once" certainly applies to carpentry, the easy space for virtual prototyping provided by the computer allows precise measurement and even visualization without any actual cutting. Precisely because the virtual world is so easy to interact with, computers offer an illusion of finished products convincing enough that it's easy to get stuck in the digital world. The endless refinement of infinite virtual prototypes lends the impression of iterative prototyping without any real-world lessons.

A virtual object can be refined ad nauseam in committee, but the most important avenue for feedback is the real world rather than the nourishing glow of an LCD screen. As we alluded in our discussion of the power of undo on a Wacom Cintiq monitor, it's easy to get preoccupied with perfection in the digital world, but perfect virtual prototypes offer little from which to learn.

A classic business school case on pacemakers contrasted the success of one firm from that of their rival. For the rival, the engineering team constantly developed new and interesting features, many of which could easily be framed as "critical" for inclusion into the next generation of pacemakers. Consequently, their development cycle was constantly dragged out such that releases became sporadic and plagued by delays. The successful firm placed less value in the new, instead implementing a rigid release cycle with inflexible drop dead dates for new feature inclusion. No matter how world-changing a promising feature appeared, it was not allowed to delay the product cycle. Features took a backseat to the release cycle and were simply rolled into the next version when they could be guaranteed completion in a finished state. For the successful firm, each release acted as a field test, with changes teased by a network of doctors and patients who could provide the development team with feedback. Because their rival did much of their development in house, each new version was field tested predominantly among the development team and reached their broad customer base only sporadically.

Precisely because designers find it so easy to "develop" new products in the computer, the stages of learning revealed by actual production are easy to neglect. For aspiring designers trying to figure out where best to focus their prodigious talents, we at Core77 would suggest that instead of trying to perfectly execute their role in what's sure to be a lengthy development cycle, they pass their work on to the next stage as soon as they think they might be ready. Even though it seems tempting to try to reach the "perfect" product during the ideation process, the lessons the real world offers both in iteration and inspiration can't be taught until they let their products out into the world, especially when it seems the most tempting to hold on to them for just a moment longer.