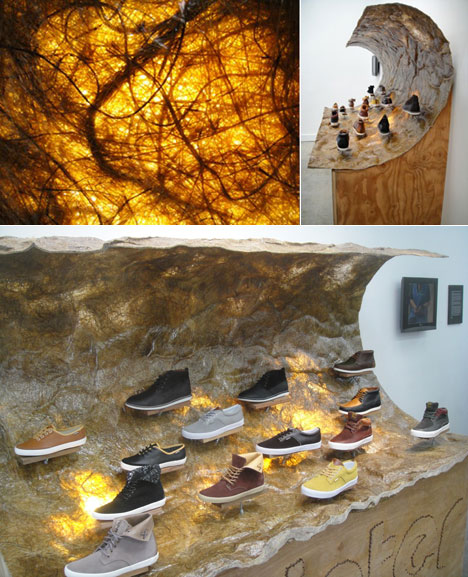 How did he do it? The process is rather complicated, but those of you production method geeks that can follow it will find it interesting. Lonnnnng description and video of the process after the jump.

Form: A three dimensional Archimedean spiral or an involute curve of a circle or square represents a universal form which is often seen iconically in nature, whether envisioned as the shape of a nautilus shell, a pattern of a snowflake or the familiar contour profile of a fluid ocean wave as it rises & breaks as a curling tube.

Materials: A bale of over 15 pounds of the world's strongest & longest raw fibers from the hemp plant (Cannabis Sativa) was combined in equal parts with an epoxy bioresin called SuperSap, by Entropy Resins. This resin is an extremely strong & sustainable epoxy created from the waste stream of the paÂµer industry (pine trees) & the biofuel industry (rapeseed). For the farmer, cultivation of hemp offers revitalization of marginal soil, as the plant has the ability to fix nitrogen through its expansively deep tap roots which also aid in water absorption while simultaneously combating field compaction.

Method: "Vacuum resin infusion" provides a state-of-the-art ratio of reinforcement fiber to resin. There is little waste or noxious odors with this process & the efficiency of the saturation is much higher than hand lamination combined with vacuum bagging. For this experimental piece, unwoven, raw fibers were used to create an uneven surface thickness, thus allowing light to penetrate through the backlit object in the thinner areas.

Process: Initially, a large wooden form was built. This large, curved surface was fit with a custom built bag. Along the periphery edge of the bag, a branched series of perforated tubes connected to a clamped flow intake line. The dry, fluffy Cannabis Sativa fiber was then stuffed into the giant bag & completely sealed, then connected to a vacuum pump. As more & more air was drawn from the bag, the uneven mixture of tough fibers was densely compressed to varying thicknesses.

Once the maximum vacuum was fully drawn, batches of the 2-part resin were measured & mixed. The intake line was inserted into the bucket of mixed resin, unclasped & the low viscosity resin was pulled through the porous fibers across the expansive part towards the vacuum pump. Once the entire dry part was saturated & infused, it was allowed a full day to cure.

Once hardened, the bagging material was removed & the edges were machined. Holes were drilled for positioning of reclaimed mixed species Brazilian hardwood shoe supports, which are height adjustable.