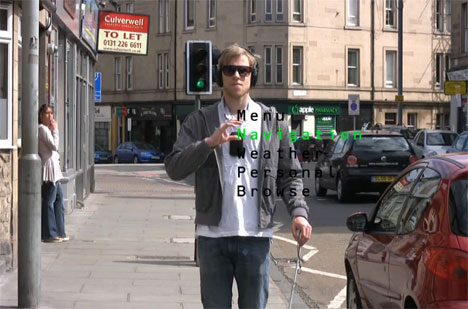 "Blinput" is a concept intended to make the lives of the visually impaired that little bit easier.

Bearing something of a resemblance to Gordon Bell's legendary, lifelog pendant-cam, this concept harnesses the capabilities of the smartphone to allow the user to engage with an increasingly networked world. Blinput uses the phone camera to interpret the user's surroundings—as well as certain hand gestures, providing something of a navigation interface.

Developer Erik Hals, a recent Edinburgh College of Art graduate, had originally envisioned a new smart product to address the needs of the blind, but soon found that the network and camera technologies in the already widely available, and relatively cheap, smartphone were more than enough to build a solution around.

Blinput, still at a conceptual level, may need some work and testing—we're wondering, for example, how comfortable a visually impaired user would be in impairing an otherwise healthy sense of hearing with headphones—but you've got to give credit to Erik for an undergraduate project well presented with the video below.