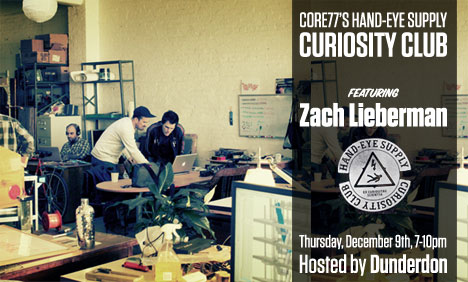 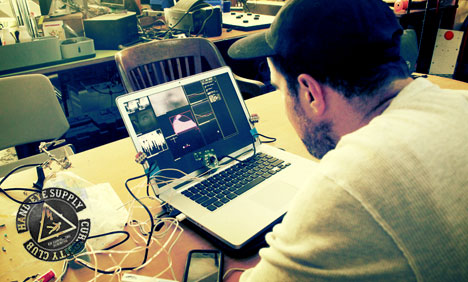 Core77's Hand-Eye Curiosity Club is coming to New York next week with special guest Zach Lieberman presenting new work, and works in progress at the Dunderdon store on December 9th.

Zach Lieberman is a Brooklyn-based interactive artist, hacker and researcher. His installations and performance use custom hardware and open source software to create new playful modes of expression — and always with an element of surprise! Drawing is central theme running through his work, his projects use various means to capture interaction with the body, eyes or voice, and it's this intersection of gesture, physical interaction and computation that he's most passionate about. 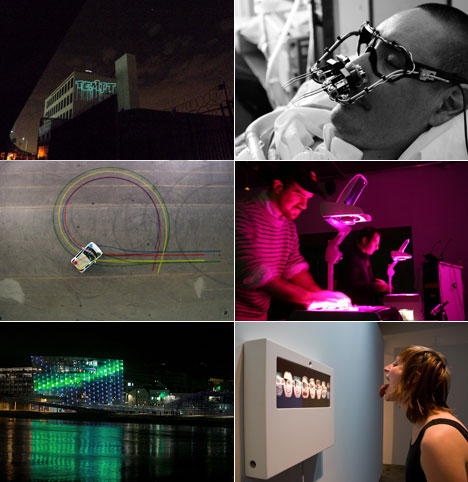 Many Core readers will be familiar with Zach's work on the EyeWriter project, a low-cost, open source eye-tracking system originally made for legendary LA graffiti writer Tony Quan, aka TEMPTONE who was diagnosed with ALS in 2003. And the iQ Font for Toyota, Zach collaborated with typographers Pierre & Damiena and pro racer Stef van Campenhoudt to make a typeface from tracking the movements of a car.

Zach is the co-founder of openframeworks, a c++ library for creative coding, he's one of the developers behind rhonda, a 3D drawing tool, and it's musical sister project sonic wire sculptor. His work has been exhibited around the world including Ars Electronica, Futuresonic, CeBIT, and the Offf Festival, and he's a professor at Parsons teaching classes in animation and audiovisual expression in code.

Join us next Thursday to watch Zach perform and demo new works including a sneak peak at version 2.0 of EyeWriter, soon to be released. Special thanks to our good friends Dunderdon for hosting the event and our drinks sponsor Sixpoint!

The EyeWriter A low-cost eye-tracking apparatus and custom software that allows graffiti writers and artists with paralysis resulting from Amyotrophic lateral sclerosis to draw using only their eyes. eyewriter.org

NightLights Zach is part of the YesYesNo interactive collective who worked on this installation projecting peoples movements 5 stories high on the Auckland Ferry Building. There were 3 different types of movement captured: body interaction on the two stages, hand interaction above a light table, and phone interaction with the tracking of waving phones. yesyesno.com/night-lights

View more of Zach's work on his site: thesystemis.com