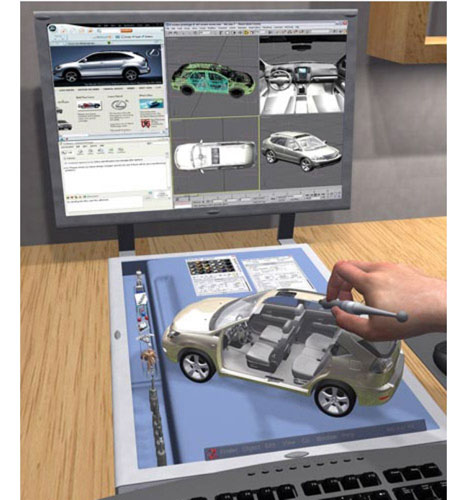 Sadly, folks, the most mind-blowing thing I saw at AU cannot be adequately conveyed through words or video (though I get paid to try). A company called Infinite Z was demonstrating their Z-Space display platform, a 24-inch monitor laid nearly flat on a table. You put on a special pair of glasses--no bulky headset, they're like a super-light pair of spectacles--and the display turns into a freaking holodeck.

3D objects appear to be perched on top of the screen. Using a light pen, you can grab objects, pick them up, flip them over with millimeter precision--it's like you have the object skewered on a long laser beam, and as quick as your hand turns over, the object turns over at the same speed. You can't see any rendering happening, it's like you're holding the real thing.

During my demo I was presented with a complicated piece of machinery, and using the light pen I was able to pull different parts off of it, flip them around and examine them from all angles. The detail was insane. For small or convoluted parts that don't lend themselves well to manipulation, they have a solution too: You use the light pen to pick up a tiny camera, the size of a Matchbox car, and you can then manipulate the free-floating camera inside, around or under your object. A screen pops up and shows you what the camera is seeing.

Infinite Z has doctored up a demo video (which we've intercut below) with the 3D elements faked in, but it is a poor substitute for seeing the real thing in action and does not at all do a good job of conveying the experience. Seen in person, this thing will absolutely blow your mind. Hopefully you won't have to wait too long--the guys at IZ are forecasting a release for 2011.