Book review: Victore or, Who Died and Made You Boss.

The matte black pages provide a striking contrast to a typically bound book, even when closed, and the cover painting sandwiches those uncommon pages between a carefully defaced oil painting festooned with Victore's trademark hand illustrations (scrawled painted words and a Van Dyke goatee) combined with a stark typeface arrangement. The cover itself actually forms a fold-out of the painting that can serve as a poster, Victore's stock and trade. From the cover on in, the monograph is just as boisterous and freewheeling an exploration of the bounds of graphic design as James Victore's career has been. 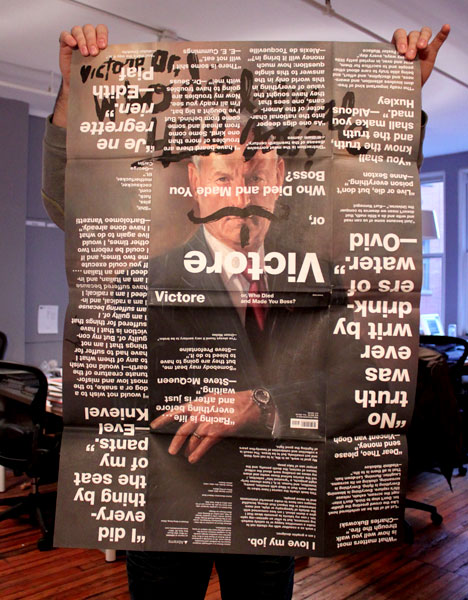 On the inside cover are a series of what this reviewer suspects were abandoned title possibilities in bold white type with strikethroughs, but they could just as easily serve as rules that are meant to be broken, such as "Location, Location, Location," or "It's Not About Persuasion." A few pages further intrepid readers will discover the most irreverent inspiration list we've ever seen including such gems as "Salvador Dali, for his mustache, not his painting," "Franz Kline, for his painting, not his mustache," and "Patrick Swayze, but only for Road House." The book is overstuffed with too many throwaway gags and in jokes to mention in the intro pages alone, so it's worth moving on to the content inside the actual graphic design. 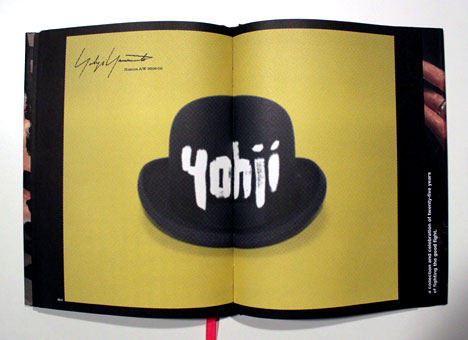 Once we get past the stark cover credits, we finally get to Victore's work. He cut his chops on book covers and the visuals are dynamite. Almost all are photograph or collages with scrawls on top, but the wit and spontaneity that drove them takes precedence over the craft of the line. A few standouts include a military photo with white lines cutting up a soldier like a butchers diagram for Johnny Got His Gun and a stark black cover with white teeth for The Werewolf of Paris..The poster content that follows is irreverent and raw. Explaining that that when he went looking for his posters, they had disappeared, Victore says, "I had made something that people wanted to steal." Well, in this case you have to pay for it, but the sheer volume of creative energy contained in Who Died and Made You Boss is sure to inspire and entertain.

Book review: Victore or, Who Died and Made You Boss.