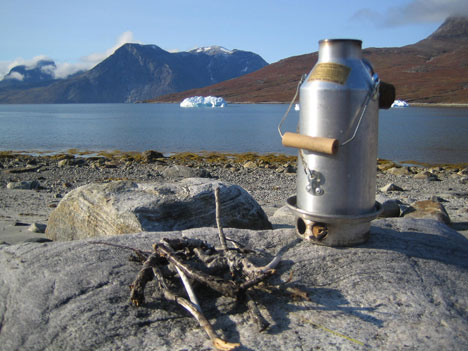 The title of this entry is referencing James H. Boye's early-20th-Century POP design I wrote about a few days ago. I'm always fascinated by great design that happened before anyone knew what ID was--it's more fascinating to me, given the primitive production methods of earlier times--and here's another example.

The Kelly Kettle, devised in Ireland in the 1890s, came about even earlier than Boye's invention and unlike that POP display, it is still in use today by campers and outdoorsmen. The device is a brilliant way to quickly boil water outdoors, even in inclement weather.

When you boil water in a regular pot, the bottom of the pot is typically the only area with heat applied directly to it, and it takes a while for the water to boil. But the Kelly Kettle's clever design maximizes the amount of surface area being heated to produce more rapid results. 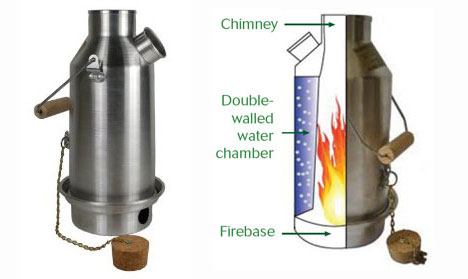 The design of it incorporates what's called a double-walled chimney. It's essentially a metal canister with a hollow, conical core running from the open bottom to the narrower opening at the top. The user starts a small fire inside the base of the canister, which keeps rain and wind out. The fire vents through the little chimney at the top, and water in the "walls" of the canister rapidly comes to a boil. 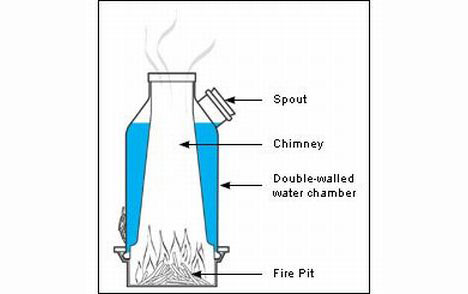 I'm guessing the first Kelly Kettles were made of tin or whatever other metals were readily available in 1890, but the modern-day version comes in stainless steel or aluminum.