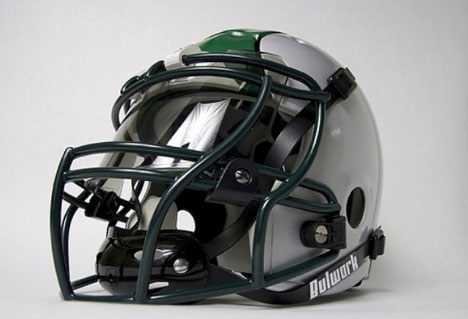 We like this ESPN story about designer Michael Princip and his self-started project to redesign football helmets, because it shows Princip thinking not only about the design, but the business side of the project as well.

First, the design. The innovation of Princip's Bulwark design is to segment portions of the helmet in order to dissipate concussion-giving shocks:

Inspired by the vintage MacGregor E & H model helmet form lines, and modern day rugby helmets, the Bulwark helmet is the result of an idea where seam lines, or, a multiple sectioned helmet could be brought back to the modern day and utilize the best in anti-concussion helmet technology. The central focus of this football helmet is a multi-component anti-shock helmet design that has a single shell at the base, then a layer of energy absorbing material (air cells/gel) followed by another layer of multiple, or single hard shell(s).

As for the business side, Princip knows that helmet companies are well-established (Riddell and Schutt are the big dogs) and that he can't beat 'em, but would instead have to join 'em. As ESPN reports, "Princip doesn't want to compete with them -- he hopes to sell or lease the Bulwark concept to one of the established helmet brands and then be part of the development team that brings it to market." A smart way to go, particularly since business concussions are even worse than head concussions.