Crowdsourcing Ideas for the City 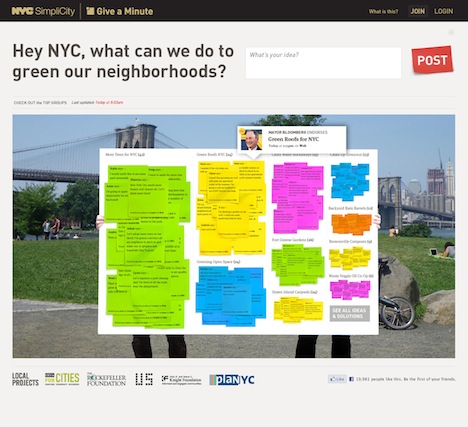 Mayor Bloomberg is not one to shy away from new ideas. The 8 million citizens of New York City are famously opinionated -- for every problem, there are at least 8 million ideas on how to fix it. Give a Minute is a new model for urban participation, a 311 for new ideas that, "seeks to reinvent the public process for the 21st century." The program engages the entire city with a single question, soliciting ideas and then connecting participants together in Action Groups. Groups are organized around specific solutions, and sponsored by anyone from a city-wide nonprofit to a neighborhood group or individual. Mobilizing resources like fund-raising efforts and city programs will help to actualizes some of these solutions. As Mayor Bloomberg stated in his announcement, "This kind of open call for ideas -- or 'crowdsourcing,' as it's called -- has helped cutting-edge companies improve services and save money. And with more than 8.4 million people in our crowd, imagine what we can come up with." The program launches in April of 2011 in NYC but cities like Chicago and Memphis are already rolling out similar programs.

Crowdsourcing Ideas for the City