Enabling Freedom for the Disabled in Developing Countries 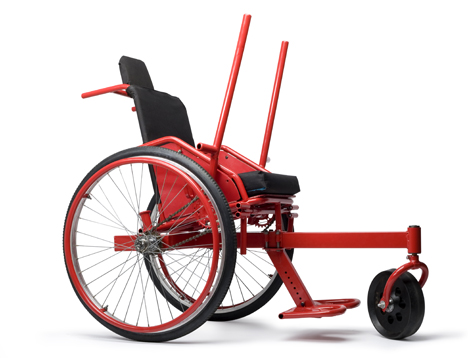 Most able-bodied folks probably don't spend a lot of time thinking about how people with disabilities navigate the world, particularly in developing countries. However, Amos Winter did, and still does. Winter, a recent PhD graduate from the MIT department of Mechanical Engineering, went to Tanzania as part of his work in 2005. He wanted to understand how people who needed wheelchairs got around and how well current wheelchair technology met peoples' mobility needs. Winter's work was part of an internship with Whirlwind Wheelchair International, a group that designs wheelchairs in developing countries. He learned that people in wheelchairs often just didn't get where they needed to go.

In fact, according to the Wheelchair Foundation, it is estimated that the number of people who need wheelchairs will increase by 22 percent over the next 10 years, with the greatest need existing in developing countries. And USAID estimates that 20 million people in the developing world need a wheelchair.

For instance, wheelchair-accessible buildings and roads are rare in countries like Tanzania. Beyond that, individuals must overcome narrow doorways, steep hills, bumpy, muddy roads and long distances to destinations like school -- often upwards of two to three miles. All of these issues combined make it virtually impossible to get anywhere with a conventional wheelchair. Beyond that, they were too expensive for individuals who often can't work due to their disability, or make about $1/day if they do work.

Hand-powered tricycles were the other existing option in developing countries. But they're too large for indoor use and too heavy to maneuver over rough terrain.

In Winter's mind, the chair he wanted to create would offer individuals: + Independence - the ability to live with as little assistance as possible + Empowerment - the ability to get to where they want to go, when they want to go + Access - the mobility that allows them to access resources and employment when these things won't come to them + Affordability - a tool that's at a price that they're able to afford 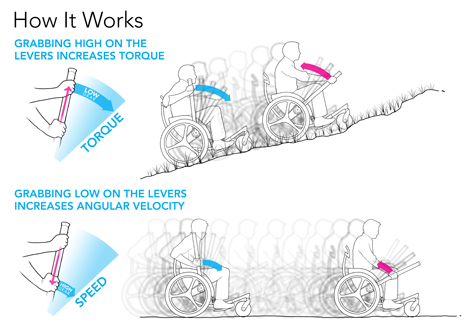 Winter came up with the idea of a lever-powered mobility aid, which could provide freedom to the disabled in developing countries. Like a mountain bike, this new wheelchair had to have a large range of mechanical advantage: with a low range for hills and mud and a high range to cruise on the street. Winter realized that a lever grasped at different positions changes the effective lever length and creates the type of mechanical advantage he needed; and so the idea of the Leveraged Freedom Chair (LFC) was born.

For rougher or off-road terrain, the individual grips the levers up higher (similar to putting a bicycle into a lower gear) for greater torque. For smoother terrain, where long-distance speed is possible, the rider grips the levers down lower to get the wheels turning more swiftly and move at a higher velocity.

There were a few key principles Winter wanted to keep in mind for the LFC: + Utilizing abundant local resources: Classic English-style bicycles are the most common form of transportation. Bikes are everywhere, making them available and inexpensive. + Made inexpensively from bike parts: Bicycle components are cheap and abundant in developing countries. They sell for less than $1 per pound. + Made locally, manufactured simply: Made locally with common materials using available techniques like tube bending and welding. + Built to last! + Repaired at the local bike shop: Because the chair is constructed from bike parts, it can be repaired at the local bike shop. 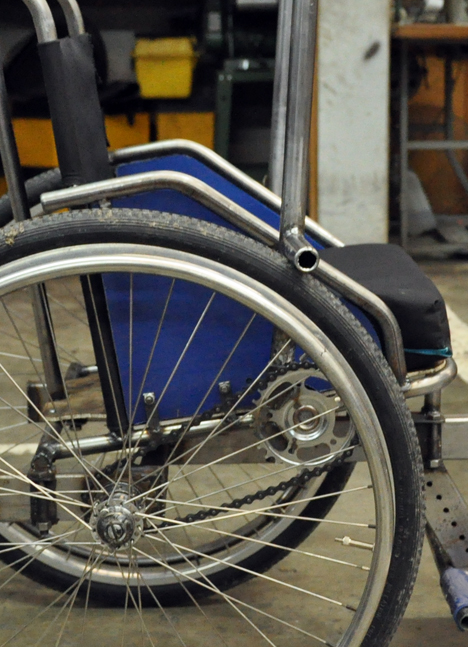 To help reach his goal, Winter created the Mobility Lab at MIT in 2007 comprised students who would work with him to bring his idea to fruition. The LFC has been in development since 2008, when it won first place at the MIT IDEAS competition. In the summer of 2008, first generation prototypes were constructed in Nairobi, Kenya and Ho Chi Minh City, Vietnam with Mobility Lab community partners who are local wheelchair producers.

After collecting feedback from wheelchair users and manufactures, the team spent a year refining the LFC design and then developed eight second-generation wheelchairs in Nairobi and tested six of them across East Africa. 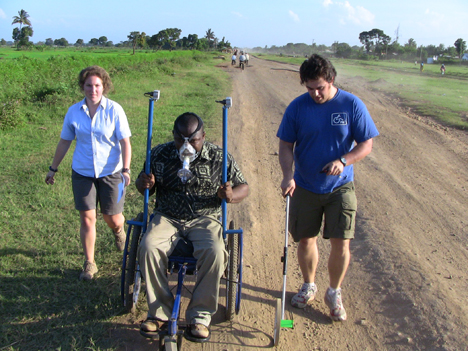 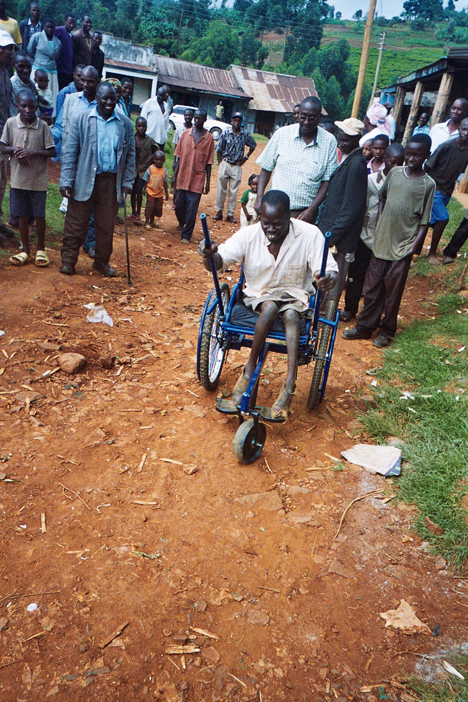 After four months of testing, biomechanical performance data was collected from the LFC riders. It illustrated that the chair was superior to existing mobility aids as far as rider efficiency and off-road performance, but still required refinement to be a viable product. The trial subjects identified that the LFC had to be narrower to fit indoors, lighter for transportation and more stable when climbing hills. Through the next year, Mobility Lab worked with community partners and stakeholders, principally with the Transitions Foundation of Guatemala and Antigua, to improve the design and prepare it for another user trial.

In the spring of 2010, Winter and his team then went to Continuum, global design and innovation consultancy, to help him with the look of the wheelchair. Harry West, CEO of Continuum, is an MIT graduate and still very active in the MIT community. Though the project was a pro-bono project for Continuum, the company went well beyond the scope of what Winter had originally asked for when they presented him with ideas.

While Winter and his team were focused on a "bottom up" approach to solve the immediate problem of mobility in developing countries, Continuum looked at it from a "top down" perspective. This made the collaboration a very powerful one, and helped take the project take on a very exciting new element. 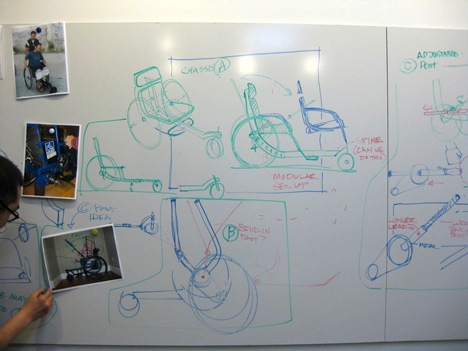 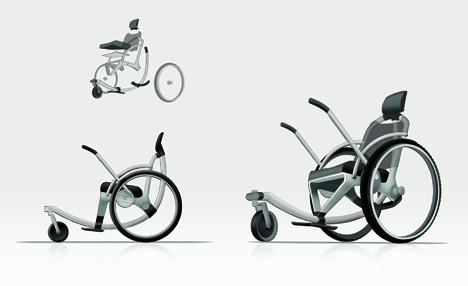 Winter and his team had considered the idea of a first-world version of the LFC after the response they got from media coverage of the project. People in the United States and Canada said they would like a product like the LFC. It wasn't until the team started working with Continuum that the first-world LFC became a reality. Continuum produced the renderings of a high-end chair, which brought the possibility to life and spurred the team to focus on this facet of the project. 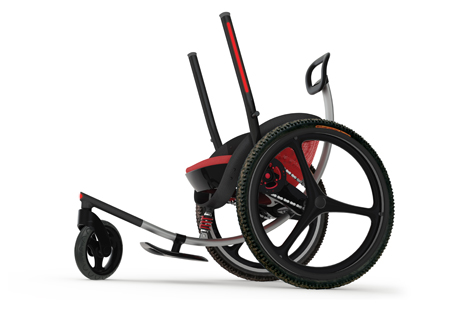 Continuum then walked Winter through what a first-world version of the chair could be, including how it would be different from the developing country version but maintain all of the things that make it special. While the "big idea" for the first-world version (aka LFC Sport) was light-weight performance, the third-world version continued to focus on utility. The LFC Sport would be constructed using sophisticated manufacturing techniques. It would include a bent aluminum spine with a custom profile. In addition to molded ports and a carbon fiber seatback frame, the LFC Sport seatback would have the feeling of an office chair created with a light-weight stretch fabric. In contrast, the LFC for developing countries would be developed from bent and welded stock tubing and bicycle parts that can be sourced locally and inexpensively. The goal for these wheelchairs is easy and inexpensive construction. 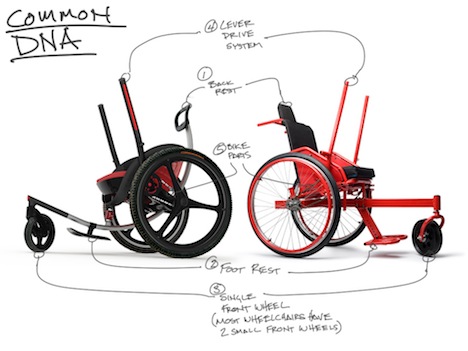 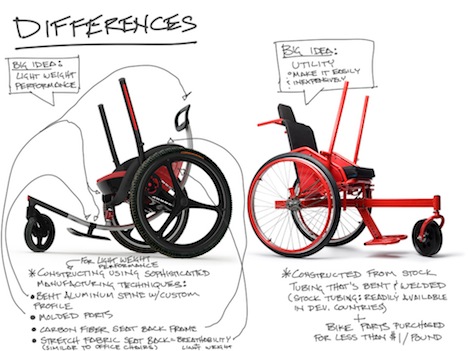 Continuum's primary contribution was envisioning what the first world wheelchair could be by creating a unique look and construction. Tapping into the core of Continuum's design philosophy, the team strove to create an emotionally compelling object that simultaneously communicated its story. The end result is a wheelchair that's comprised of two defining design elements: The arching spine and the closed loop. These elements determined its look and how it would be constructed. 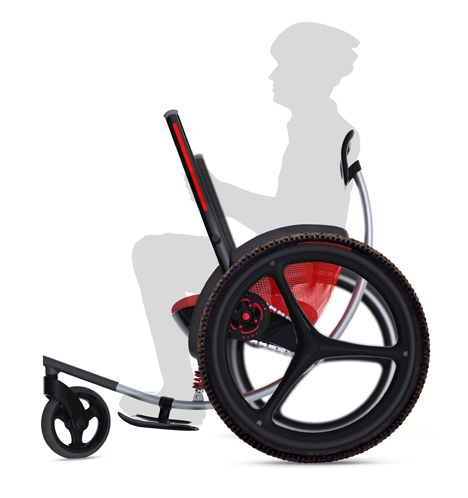 Using the unique single front wheel design of Winter's wheelchair as the defining element and point of departure for the LFC Sport, Continuum suggested a concept that was built off of a central, arching spine. This would become the defining gesture. Metaphorically, the wheelchair's spine is an extension of the user's spine enabling him/her to have a new level of mobility. Everything else is attached to this spine moving from the front wheel up to the footrest, the seat and drive train assembly, and finally, the seat back. 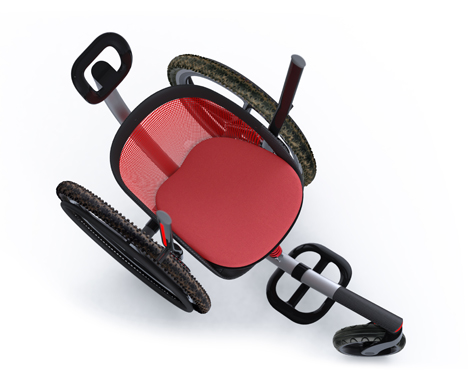 Another defining element is the closed loop. The entire chair is comprised of closed loops: where the user places her feet on the foot rest; how the foot rest attaches to the spine; the carbon fiber seat back frame loops underneath the seat and around the back of the user (an embrace); the back rest is a closed loop with a hollow center. The closed loop is indicative of the wheel. The wheel signifies movement.

Most conventional wheelchairs in the United States range in price from $1,000-$2,500. At a pricepoint of about $3,000 on the LFC Sport, they could purchase three more for developing countries. The team decided tentatively on a "buy one, give three" approach, wherein one first-world wheelchair would pay for three in developing countries. 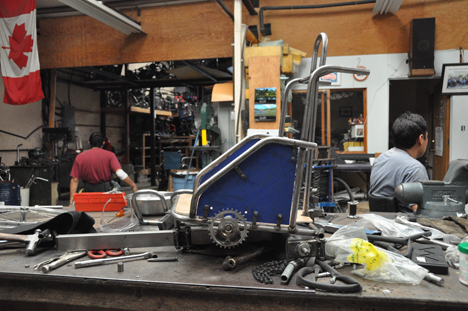 Since then, Winter has been working with developing countries on production. The goal is to develop the chairs from bicycle parts, so that anybody who can fix a bike can fix a LFC.

The LFC is currently on two tracks. The LFC for developing countries is slated to go into production soon in Guatemala and Fall 2011 in India, with the goal of producing 1,000 a month. India is an excellent example of where bicycles are the prevalent mode of transportation. Winter's goal is that the wheelchairs be produced in the countries in which they're used, providing jobs for local citizens.

As for the second track, the LFC Sport, is currently in the prototyping stage. The Mobility Lab is already going out to wheelchair users in the Boston region to determine the interest in the idea. At this point the LFC Sport will be available for purchase in late 2013. 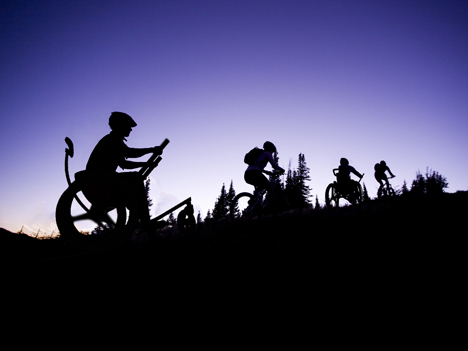 So what unmet goals does the LFC meet? + 1/10 the price of a conventional wheelchair -- sold for $100 when conventional wheelchairs cost anywhere between $1000-$2500 + Compared to conventional wheelchairs, the lever-driven system provides greater propulsion efficiency and unprecedented mobility on rough terrain + With removable levers and a narrow wheel width, the chair can be used both indoors and outdoors. + Constructed from bike parts and manufacturing techniques available in any developing country.

Enabling Freedom for the Disabled in Developing Countries