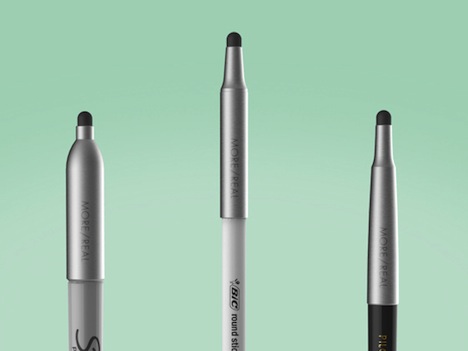 Don Lehman just launched a Kickstarter campaign to produce an ingenious idea -- a Stylus Cap that turns a standard pen or marker into a touchscreen stylus. The MORE/REAL Stylus Cap turns a Sharpie, a Bic, or a Pilot Fineliner into a touchscreen stylus that works with any capacitive touch screen. You get all the benefits of an marker that can write on paper with a stylus that gives you superior control to sketch and take notes on touchscreens such as the iPad. Read more about his project after the jump and donate here! 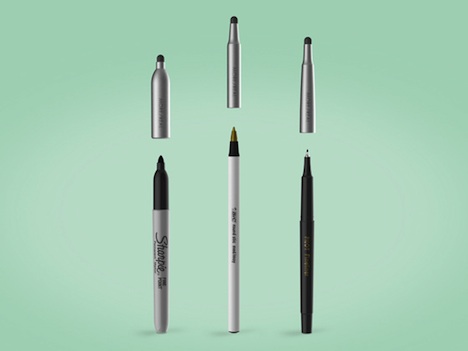 I set out to design the Stylus Cap, mainly because I wanted one for myself. I love all the power tools like the iPad and iPhone bring to sketching and note-taking: you can quickly work out an idea from anywhere and send it off instantly to anyone. I've been in meetings with the iPad where I have been able to draw up a concept, have everyone take a look at it, make some tweaks, and then send it out to anyone else who wasn't in the meeting but needed the information. That kind of communication power continuously blows my mind.

Unfortunately, using your finger to do those tasks feels more like finger painting than doing something that requires more precision. We are preconditioned to using pens and markers for taking notes and drawing. There are a few styluses on the market that work with touchscreen devices, but for the most part they are less than ideal. Poor ergonomics and big, mushy points, these styluses feel like using a golf pencil with a tennis ball for a tip.

On the flipside, the more I used the iPad, the more I realized I didn't really want to fully walk away from using paper. There is an immediacy and decisiveness to using paper that allows me to quickly sort through my thoughts in ways that digital screens can't.

So I thought about this problem for awhile, until one day back in December, and I swear this how it played out, I was playing with the cap of a Sharpie, taking it on and off and on and off, just fixating on this cap when it suddenly hit me, "Uh, a cap would be a good stylus." It was not unlike that scene in 2001 where the apes suddenly realize bones could be used as weapons after they touch the monolith. I believe that makes me the ape. After that I was off to the races.

In all seriousness, what drove me forward was I was dying to get one of these into my hands. I've put a lot of thought into the quality of the materials, the tiny design touches that I always obsess over, the sustainability of the product, and now its at the point where to keep moving with it, the Stylus Cap needs your help.