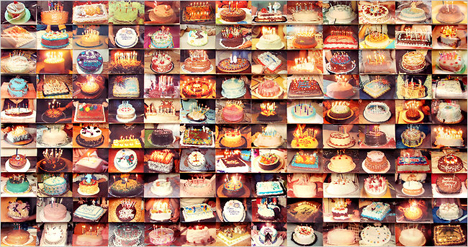 In the era before the socially documented digital age, when a person passed away, the residual evidence of their existence was usually found in journals, photo albums, dusty shoe boxes of mementos high away in some closet, and of course (most importantly) the memories of friends and loved ones. However, as we move continue to build a digital copy of ourselves, quantifying an infinite number of check-ins, status updates, blog posts, and uploaded photos, we are generating a much different post-mortem impression.

An example of a memorial page on 1000memories.com.

In a recent article, the New York Times' Rob Walker dissected the current environment of the digital afterlife -- everything from memorial sites like 1000memories.com to the unfolding of the untimely death of a suburban technophile on platforms like Blogger and Twitter. Facebook too has been having to come to terms with how they deal with "ghosts" on their site, their term for the profiles of deceased users.Our struggle to define and reaffirm departed loved ones' existence in the 21st century is reflected in designer Nicholas Felton's most recent annual report. Felton, best known for his obsessive data-centric graphic design, personal annual reports, and the data visualization tool daytum, chose to memorialize his recently deceased father in the 2010 edition of the report.

The result is an incredibly personal and visually stunning compendium of a long and rich life. The 14-page report summarizes everything from his father's favorite social activity in the nineties to his preference for a specific toll gate on the Golden Gate Bridge. I have read many reviews of this piece on various design blogs, but none of them have managed to get beyond glowing comments for the typography and color selection. It is unfair to judge much beyond that, and I applaud Felton for having the patience and passion to pursue what couldn't have been an easy project. However, I am haunted that this will be the lasting public memory of this man, Felton's father. The report is presented almost without comment, and because it is so grand -- so many thousands of pieces of ephemera -- we feel we are expected to have seen his whole life in just a few pages. And maybe we see that same fallacy apparent in our modern mementos, the updates and tweets. It's not so much whether various websites will save all of those, which after all is a topic that's been addressed elsewhere, at length. It might be more about whether those who survive us will look at that, our digital detritus, and feel like the sheer amount of data and metadata preserves a full narrative of our lives, or a more complete chronicle than was previously possible.

Similarly, when we all pass on, we will leave digital imprints of ourselves -- perhaps they will not be as well-crafted or articulate as Felton's remembrance, but they will be fragmented, inanimate, immortal images of ourselves. Though death is often something we as a culture avoid reckoning with, we are at a watershed moment in defining a new paradigm for our end-of-life affairs. As the Internet matures beyond users hiding behind the anonymity of pseudonyms and we begin to have more stake in our individual presence, the issue du jour of identity and privacy will be raised yet again. What do our loved ones become privy to? What responsibility does Facebook, Twitter, Flickr, or Google have to preserve our data for posterity? Do the terms of service expire when we do? How can we as designers ensure a better compilation, curation, and protection of our Internet selves that not only preserves our memory, but also brings closure to every dimension of our existence?

Images from Flickr and Feltron.com respectively. Written with contributions by Robin Camille Davis.