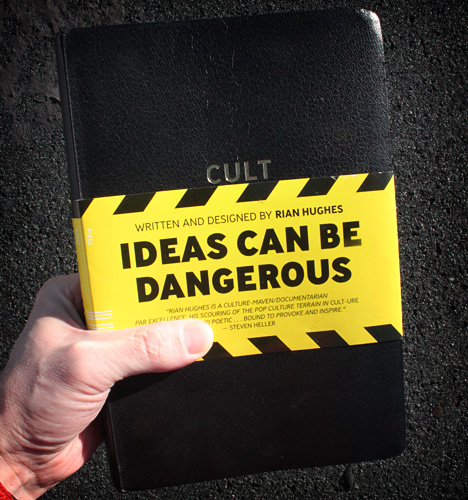 Rian Hughes' new book Cult-ure is bound in faux leather and gold trim. The biblical references don't stop there, as the author handily provides a fabric page marker for the reader to keep track of what page/psalm they're on. Interestingly, the yellow and black dust jacket barely covers the front. On the back of that caution-strip, explanatory prose clarifies the allusion, stating that Cult-ure is meant to be "Gideon's Bible for the boutique hotel."

Positioning the strip one way presents the reader with a fragment of the title "CULT," followed by the phrase "IDEAS CAN BE DANGEROUS." While he spends very little of the book addressing the Bible itself, the rational free-wheeling fount of ideas spilling from this book could easily be taken as an affront by people with religious memes. Indeed, even the word meme (which Hughes uses a lot) was coined by atheist commentator Richard Dawkins in his book The Selfish Gene, and refers to the survival of the fittest of ideas in the forest of the human mind. When Internet entrepreneurs refer to ideas spreading virally, they're talking about memes, and they, along with Hughes, owe quite a debt to Dawkins. 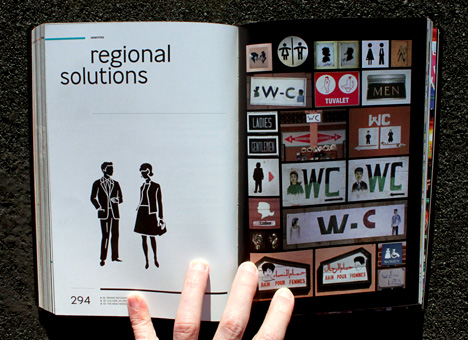 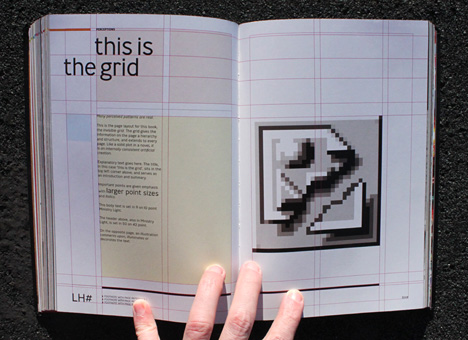 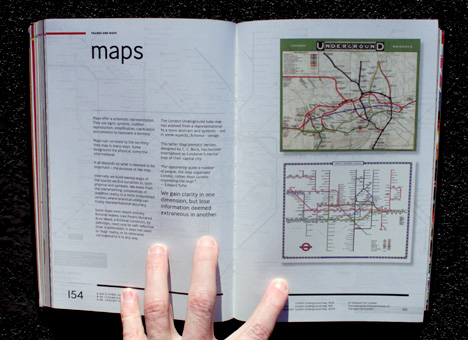 Hughes is a former comic book artist currently practicing in graphic design, but what makes Cult-ure relevant to design readers is not Hughes' background, but its connection to non-hyphenated "culture." Hughes references Tim Hewell's comment that, "the battle for ideas is far more complex than the battle for territory -- and likely to last even longer." Culture is where it will take place; every product designer thinking about market share should be thinking about share of mind. Especially in the wake of recent events in Egypt, new media resources allow for the spread of ideas faster than ever before. 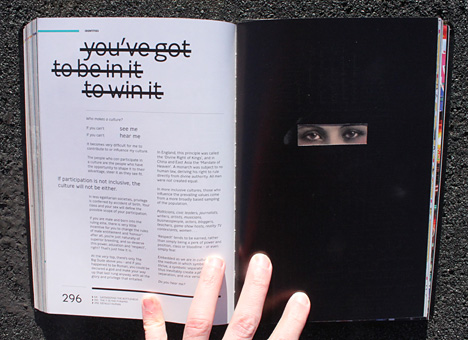 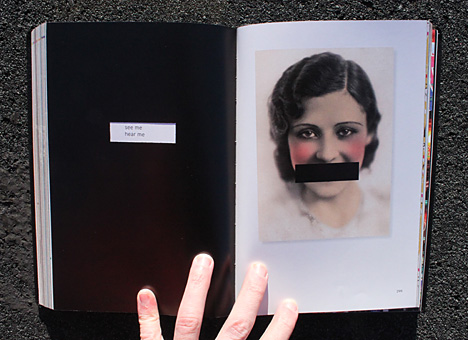 Each two-page layout of the book contains a singular idea in text on the left page and photos and graphic design on the right side. One particularly compelling page is all black, with eyes peering out through a rectangular cutout as though a burka. The next spread reveals her face with the "missing" rectangular cutout over her mouth. To Hughes, anyone who tries to suppress rational inquiry and free speech, whether a religion or an autocrat, deserves to be mistrusted. We happen to agree.

Each spread has footnotes at the bottom that function as hyperlinks, referencing different topics on divergent themes. The author also explains that there are a number of nested jokes and codes hidden away in the text. One page includes a series of parallel lines representative of tall grass, but when you move away from the page, the face of a wolf in the grass appears as a visual trick. Another layout shows hands appearing to hold the book open showing the content on the pages prior, but the pagination is correct. The spread pictured isn't in the book; but the picture of the spread is! Loads of fun. 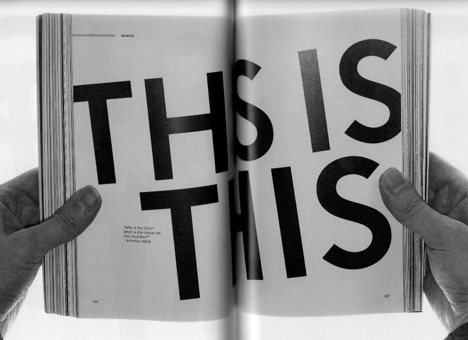 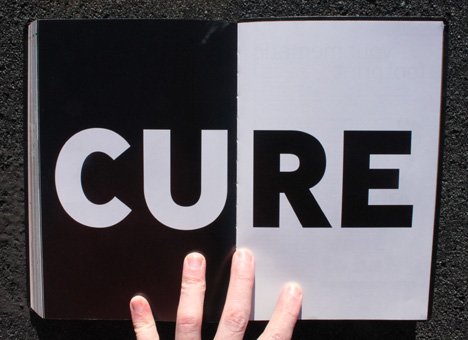 In terms of the written content, Cult-ure a tour de force skim of ideas, if such a thing is possible. Hughes clearly knows enough that he could write whole dissertations on any of the chapter headings. Instead, we're treated with amazing fragments and thoughts, like "your memetic footprint," or "CULT-URE" on one page, followed by "CULT-CURE" on the next. Interspersed between the text are digressions on particle physics and quotes from sources ranging from Richard Feynman to Oscar Wilde. The book is filled with ideas. Hughes quotes Alvin Toffler, who states that, "The illiterate of the 21st Century will not be those who cannot read and write but those who cannot learn, unlearn and relearn." Cult-ure certainly provides a lot of opportunities.