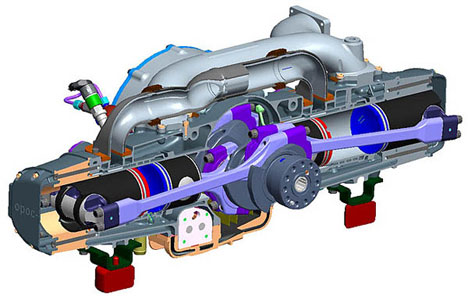 When describing something that is gaining momentum, we still use the expression "gaining steam," a throwback to the era of steam power. And if it seems ridiculous to refer to a technology that old, consider that we're still driving around in cars using internal combustion engines, which first started to "gain steam" over 100 years ago.

Most people believe the future of automobiles is in battery-powered electric engines, which would influence the design of the vehicles themselves; the concept of having small separate engines for each wheel, in particular, opens up some exciting possibilities for transportation designers. But there's still a chance things won't go that way, as there are still companies tinkering around with the internal combustion engine and actually making breakthroughs.

Most recently, two companies called Navistar and EcoMotors are collaborating to commercialize the latter's OPOC motor technology. OPOC stands for Opposing Piston/Opposing Cylinder, and in a nutshell the design uses two pistons crammed into one cylinder. Mated with EcoMotors' Electrically Controlled Clutch, this is a bit of a gamechanger in internal combustion.

Basically, internal combustion engines in and of themselves are not bad, just inefficient. They produce a fair amount of stinky and ecologically-unfriendly waste compared to the amount of motion they generate. EcoMotors' variant of the engine offers a heckuva lot more bang for the buck, so to speak, as their engine design is much smaller, uses less materials, and is more efficient. It can also be made to run on a variety of fuels, and the aforementioned clutch design can shut down cylinders not in use.

See the vid below for more details.

Interestingly enough, the concept of an OPOC engine was first advanced when internal combustion was still in its infancy, way back in 1907; it never caught on, for reasons far too complicated to go into here. But engine geeks interested in the tech can click here to check out fourteen other examples of OPOC engines devised over the years.