Interesting update from contact in Tokyo: "Suntory vending machines have emergency levers beneath a sticker on the upper-right corners. Pull the sticker off, pull the lever firmly and you'll get free drinks." 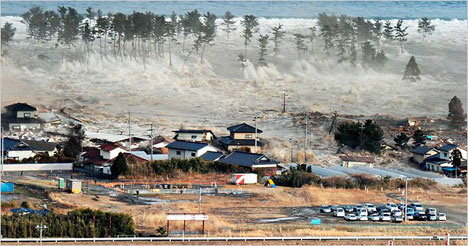 [above images via AP]

Japan was hit by a massive 8.9 earthquake this morning, the largest on record, about 230 miles northeast of Tokyo. The resultant tsunami has reportedly overturned cargo vessels before crashing inland to destroy houses and sweep cars away.

This being the era of cellphone cameras, we're already seeing YouTube videos posted by citizen journalists in areas lucky enough to still have electricity. The first is of a convenience store presumably away from the devastating epicenter, while the second is reportedly of an explosion at an oil facility:

A friend in Tokyo, where earthquake-proof buildings rocked but no collapses have been reported, writes that she "Went out on food run for the office. Streets are full of people queueing for taxis and buses while others face facts and start the long walk home. Food almost totally sold out of convenience stores. My friend Ron says people are queuing to buy bicycles to get home."

The death toll near the epicenter and in the tsunami-stricken areas has not been estimated at the time of writing as rescue efforts are currently underway.

In a new form of news coverage, the Times is keeping an updated page of YouTube videos as they continue to come in from both news sources and citizens.

The following videos are from professional news sources: