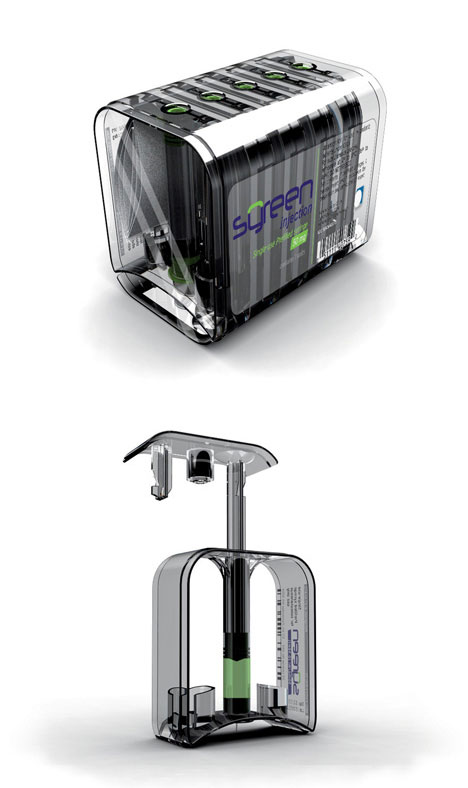 It's no surprise to most experienced ID'ers how long a good design can sit on the shelf before finally making it to market and having its intended impact, if it ever makes it at all. Here's a look at how Serge Roux, an industrial designer for Cambridge Consultants, is struggling to make the Syreen happen.

You may remember the Syreen from our report on it last year. It's a non-glass syringe system that serves as its own packaging, to reduce waste, and is designed to be nested together in units for shipping; these two things alone reduce its packaging weight and volume by 30 and 50 percent, respectively, as compared to traditional syringes.

The Syreen hasn't attracted any buyers to date, and Roux highlights why it's tough getting the medical industry to care about being green:

'The figures are frightening,' [Roux] said. 'In the US where I'm based, we produce more than 66,000 tonnes of medical waste per day, equalling two million tonnes per year. Around 85% of that is non-hazardous, which means that people just throw things away in bulk. In today's economy this is less acceptable and that's why there needs to be a shift in thinking... People in the medical industry get shielded behind the fact that it is not their priority—for them, patient safety and support comes first, but the two don't have to be incompatible.'

The redesigned Syreen II has had to shed some of its features in a bid to gain acceptance. The original Syreen was made from injection-moldable Cyclic Olefin Polymer plastic; the Syreen II now incorporates glass, which complicates recycling but enables the design to be filled with product on a standard assembly line. "...I guess this is usually how innovation works," says Roux. "You have a radical concept and then you can come back from it.