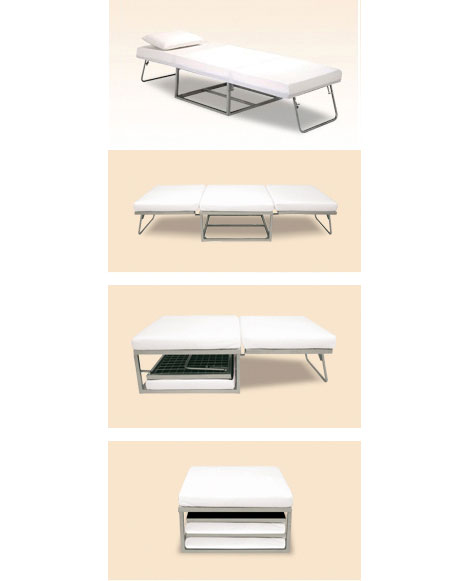 The upshot to not owning a couch, as I don't, is that unexpected guests recognize that they cannot disrupt my daily life by crashing here, since there's no place for them to sleep. Thus I don't get 2am door buzzes from my degenerate friends who've drank too much and would rather vomit in my conveniently-located abode rather than fight pukery in the back of a cab.

Those of you more hospitable and barf-tolerant than me are perhaps happy to offer up your couch, and maybe you even own a folding cot. But I guarantee that if you own a folding cot, or have ever even seen one, you've never slept on it voluntarily. Folding cots, with their thin, ineffectual mattresses and protruding springs, seem designed to break your back a few REM cycles at a time.

But now a company called Sleep Innovations is making a cot that strives to be not only comfortable, but useful even when you're not putting people up. Their BOB (that's Bed-Ottoman-Bench) has a memory foam mattress, does double duty as a bench, and triple duty as an Ottoman when it's folded up. I suppose I would buy one of these...pending an effort to find some classier friends.