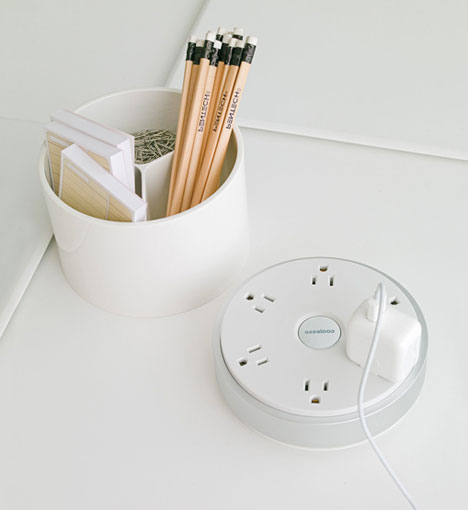 Here's some intelligent industrial design by Scott Wilson and MNML. The Power Pod, designed for Coalesse, is intended to solve an obvious and underaddressed problem: These days people plug and unplug things all the time. It would be nice to have a power strip within easy access of our workstations for this, but that means putting it out in plain sight—and most powerstrips are ugly as hell, not to mention many still do not address the fact that power adapters are too freaking bulky to fit side by side. I absolutely hate this latter point because it speaks of a real lack of design awareness. 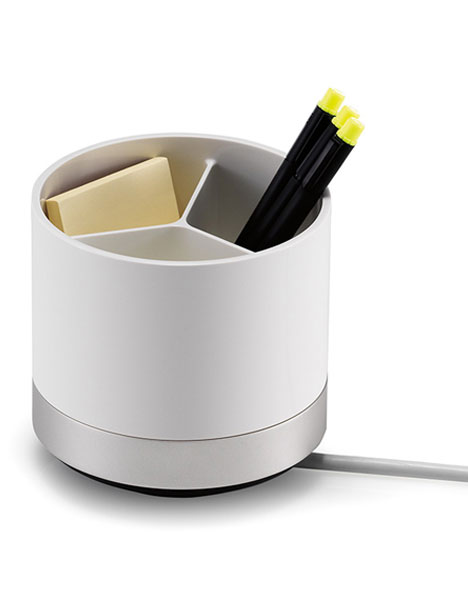 The cleanly-designed Power Pod, on the other hand, is easy on the eyes and disappears when not in use by disguising itself as a useful desk accessory. When it comes time to charge you remove the pen-holding part to access the six integrated sockets, which are intelligently arrayed with plenty of space between them so you can fit even the most annoyingly bulky adapter without crowding out its neighbors. 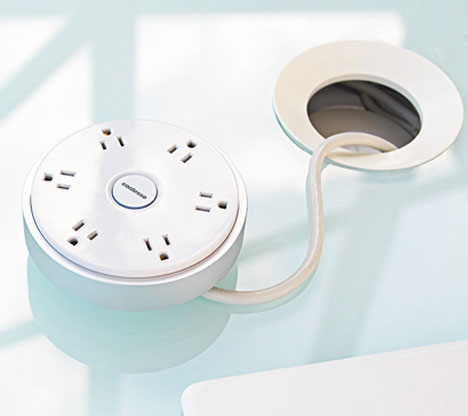 As you can see in the photos here, I believe the Power Pod was designed primarily for use in a conference-table-type environment so people can plug in laptops and projectors, but I've been testing it out in a personal-use context. Below are my findings. 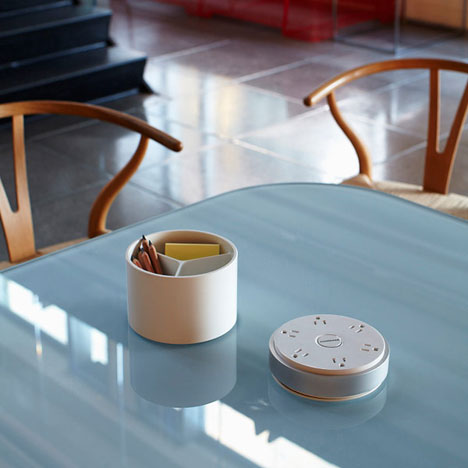 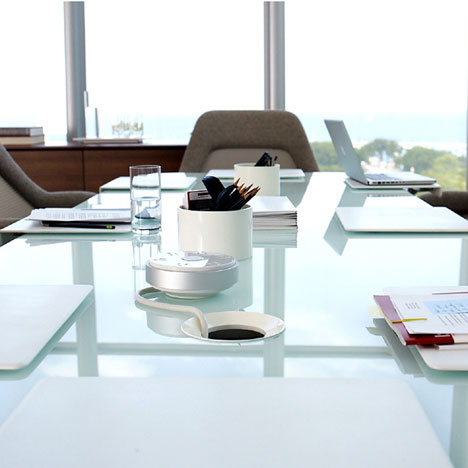 I live in a high-dust environment, and every powerstrip I own seems designed to trap dirt in various nooks and crannies that make cleaning difficult. Some of them have that annoying gritty-plastic texture while others are made from that cheap smooth plastic that attracts dirt like nobody's business. As a result they're all filthy; if I wanted to clean some of them properly I'd literally have to use a toothbrush and some type of solution, which is absurd.

In contrast, the Power Pod has a glossy finish and the socket holes are flush with the surface, making it easy to quickly wipe clean with a Swiffer. There are no extraneous and aesthetically-irritating grooves molded into it so there's nowhere for dirt to cling; it's just ABS plastic and an aluminum rim for the bottom. The one I'm using is as clean and new-looking today as it was when I began testing it about two months ago.

The fat button in the center of the Power Pod is the on-off switch, and it's got that pleasingly clicky tactility that makes you want to press it. The entire thing also serves as a surge protector and there's a reset button hidden on the bottom, which as far as I'm concerned is where it should be; given that you'll rarely use it, it oughtn't be sticking out of the side as it is on other powerstrips.

I've been testing the Power Pod in two places to decide where it should "live." One spot is on my desk, where I like being able to quickly unplug the laptop adapter when I need to take it on-the-go. I also use it to plug in chargers for those objects that I use infrequently enough that they don't rate a slot on the permanent powerstrip under the desk, like a compact digital camera and a power boxcutter I occasionally use to bust cardboard boxes down to size. 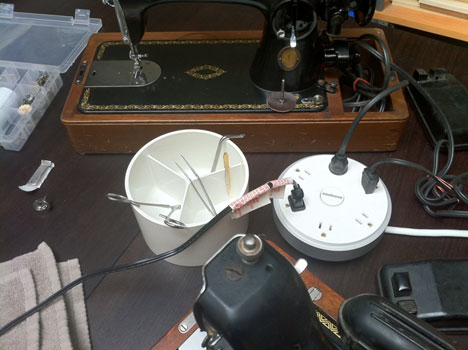 The other place I've been using it is on my workbench for sewing machine repairs. Sometimes it helps to plug in multiple sewing machines or foot controllers at once (to compare the performance of a being-fixed one to a perfectly-fixed one) and I like being able to quickly swap them in and out while also plugging in a Dremel, soldering iron and heat gun. Being able to easily hit the Power Pod's off button is also easier than plugging and unplugging the soldering iron.

For this workbench purpose the accessory tray makes a handy tool holder, and when table space is tight its relatively small footprint makes it a better choice than laying the tools out on a towel. Lastly, some of these older machines I work on are often covered in fifty years of dust and grime, and when that or my greasy hands eventually touch the Power Pod, it's easy to clean off.

In two months of testing I've found no negatives in the Power Pod's simple, clean design and utility. I won't go back to using an on-desk powerstrip after using this. As for the question of which place it should live, the desk or the workbench, the answer is obvious: I'll have to get another one.

The Power Pod launched last week and is now available for sale. It's a bit pricey for my tastes at 99 bucks, but it's a damn sight better than looking at an ugly powerstrip that cannot use all of its sockets to accommodate today's chunky chargers.