Urban Water Needs: Can We Keep Up? Visualization by Hal Watts and Matthew Laws

Matthew Laws and Hal Watts, a recent graduate and current student of the Royal College of Art, recently created this rather clever data visualization to convey projected water consumption. "Urban Water Needs: Can We Keep Up?" is a real-life take on topographical bar graph infographics—a fresh analogue approach," according to Watts and Laws—earning a runner-up nod in Visualizing.org's World Water Day Challenge. 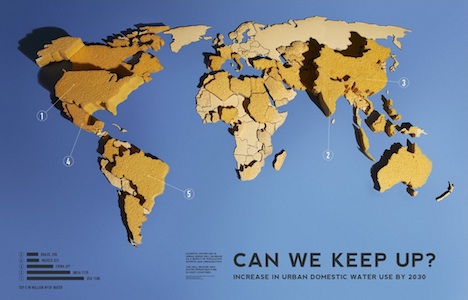 Combining their engineer's precision with creativity honed at the London Royal College of Art, Matt and Hal first designed a world map entirely out of cheap kitchen sponges. They then poured water onto each country in amounts proportional to that its expected urban water consumption in 2030. Elegantly literal, the sponges grow in height according to how thirsty the country will be, generating a stark topography of future needs for urban domestic water.

As more people crowd into ever-expanding cities over the next 20 years, those cities will experience huge increases in the demand for domestic water - the kind used for cooking, cleaning, sanitation as opposed to industry and agriculture. It's easy to see that the needs will not be equitably distributed. As Matt and Hal note, "While this will have little impact on some countries, others will need to develop large new infrastructures. Some countries will be able to afford this more easily than others."

Check out a short making-of video after the jump...

It's more Ai Weiwei than Boetti, where the physical properties of material—sponge—impart a familiar, tactile and altogether intuitive representation of the concept. Of course, it's worth checking out Visualizing.org to learn more about the winning entry by Joseph Bergen and Nickie Huang and the other runner-up, Tuduyen Nguyen and Cameron Reynolds-Flatt, as well.

Urban Water Needs: Can We Keep Up? Visualization by Hal Watts and Matthew Laws