"Last Monday, our Brazilian friend Claudia offered to drive us to the airport...until she realized that Monday was her "car-free day." Cars in São Paulo have to stay off the road one day a week, a regulation that was introduced to reduce the city's heavy traffic. Even the city's own mayor uses a helicopter in order to be on time for his meetings. Of course it's a pity that we lost our ride to the airport but somehow we appreciated the sustainable sound of this solution to reduce heavy traffic in a city where traffic is a monster. That is, until our friend explained that this "sustainable idea" resulted in most people buying two cars allowing them to (again) drive all week long. It's not easy being green." –Observations on São Paulo, on our way to Argentina

São Paulo's traffic rule is just one the everyday discoveries for the It's Not Easy Being Green project, an initiative by two designers exploring sustainability in materials and design around the world.

A year ago, Aart van Bezooyen and Paula Raché decided to embark on a unique project focusing on sustainability in materials and design. Instead of the usual desk research we started planning a creative journey around the world. After a lot of thinking and pinpointing countries to visit, it was time to get an around-the-world ticket and to start writing friends and colleagues for local contacts and country information. 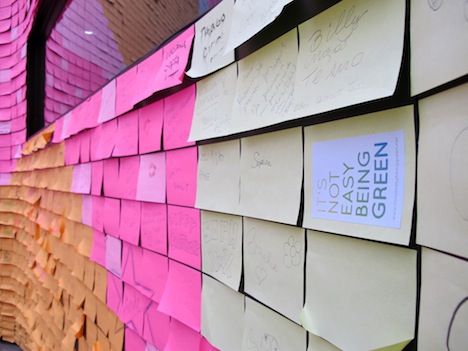 Today, It's Not Easy Being Green is an official event for the Hamburg European Green Capital 2011 program that started March 1st 2011. Over the course of 184 days, Aart and Paula are offering inspiring lectures and materials workshops to explore the practice of sustainability by meeting, discussing and working with local creative youth and professionals. "In previous workshops we experienced that many designers find it hard to put sustainability into practice," explains Paula. Aart adds: "We planned this six month 'out of office' [tour] to document existing examples and hear people's experiences from a firsthand account."

Instead of offering quick answers, this project is more about raising questions and creating awareness with the help of great people, places and things along the way. During the journey we'll conduct explorative research focused on sustainability. For instance, at the Delft University of Technology we focused on local (natural) materials. At University of the Arts Bremen we focused on bioplastics. We will also explore the status quo of sustainable packaging design and design management education overseas.

On March 4th, we traveled from Rio de Janeiro to Curitiba by bus. What should have been a 12-hour bus trip turned into an 18-hour experience due to heavy traffic surrounding the Carnaval holidays. During Carnaval, thousands of people travel in two directions: while one half travels to Rio de Janeiro to party at the biggest street festival in the world, the other half escapes to the coast to relax—it seems we were caught somewhere in the middle. 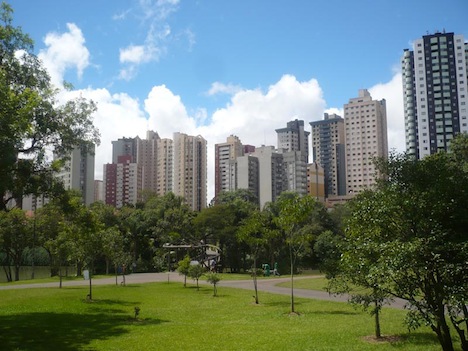 Curitiba is the 8th largest city in Brazil and often recognized as the most sustainable city in Brazil. Before our journey we read articles about the city's recycling programs and world-famous bus system that allows almost everyone to get anywhere with public transport. The city also has many parks and forests to enjoy on foot or bicycle. In other words, the city serves as an example of green urban planning.TRANSPORTATION & GREEN SPACE

Arriving in Curitiba we found ourselves in the middle of a city full of skyscrapers with more infamous cars than famous buses. The city center is anything but green and riding a bike downtown seemed to be a sure way to get seriously injured or killed. For a so-called "Green Capital," we were quite disappointed. The next day, our local host took us for a drive around the city—only then did we discover the green parks of Curitiba. Unlike Central Park in New York City, Curitiba has some 30 parks and forests along the outside ring of the city. We enjoyed this green discovery and hope that the parks will be cherished since the city is rapidly expanding making the conservation of its green perimeter a significant challenge for the near future.

During our stay we also learned that most of the "green" success stories including the bus system, green parks and high recycling rates originated in the early 1970's when architect Jaime Lerner was mayor of the city. Today, many of these systems are under strain. Most young people we spoke with would prefer a car due to the unpredictable and sometimes unsafe bus system. The parks are being swallowed by the ever-expanding city of Curitiba (the population tripled in the past 20 years) making the conservation of its green surroundings a big challenge for the near future.

Curitiba's trash bins allow separated waste disposal up to five categories: paper, plastic, metal, glass and organic waste. When we looked into the trash bins we noticed that oftentimes the waste was not separated at all. Of course separating waste is only the beginning of a sustainable system. Recycling seems to work pretty well but there are still few programs for reusing or recycling the collected waste (which became one of topics we focused on during our workshop). 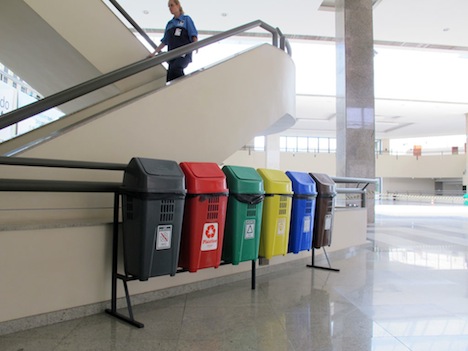 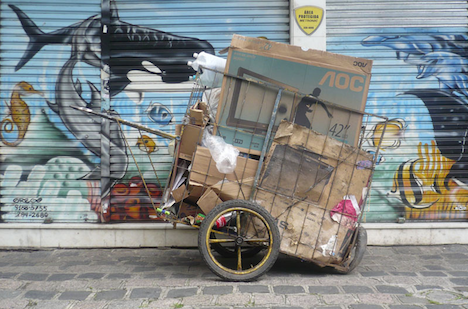 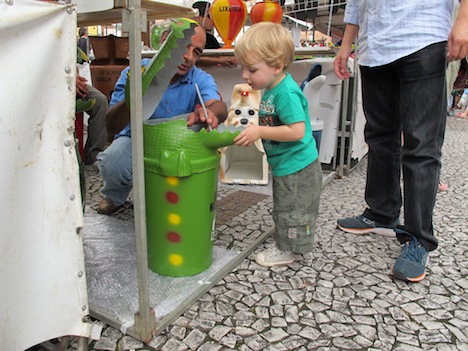 Curitiba has a new hygiene law that mandates in wrapped/sleeved cutlery, drinking straws and even single paper napkins. This focus on hygiene showed us that the city cares about the well-being of its people. Of course, the major downside is that every lunch or dinner yields an obligatory pile of packaging and wrapping materials that has to be disposed. 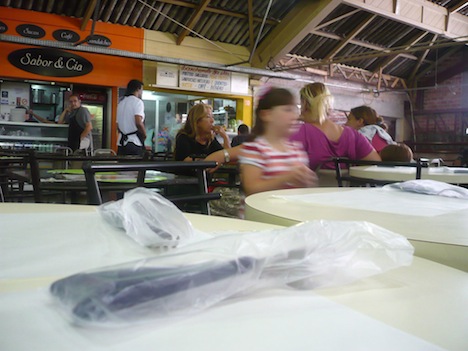 Cutlery wrapped in plastic for the many locals eating at the famous Mercado Municipal de Curitiba. 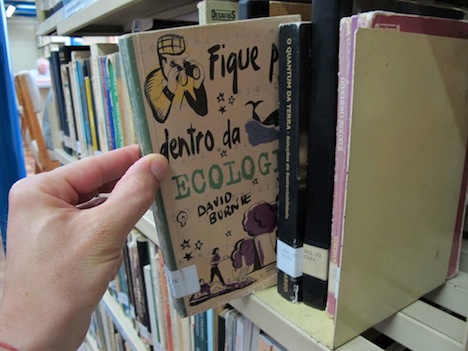 We discovered that some 30 years ago sustainability was a big topic in education (for children). 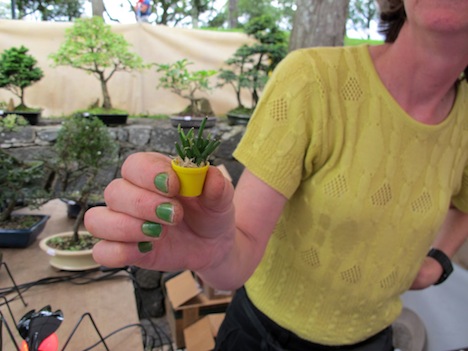 Exploring local crafts and natural materials (including "micro plants") at the market. 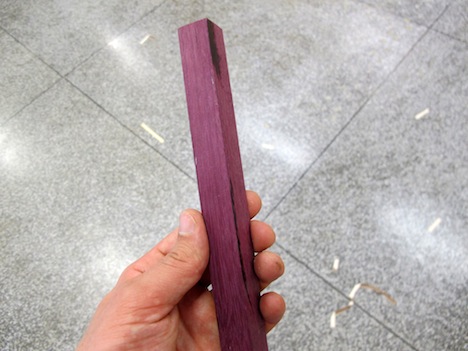 Our first lecture and design workshop was scheduled with the Pontifical Catholic University of Paranã (PUCPR), one of the most recognized private universities in the city. Dr. Virgina Kistmann invited us to inspire the design students at the PUCPR with a lecture on the role and importance of materials in design, industry and education. With "Olã, boa noite!" we began our presentation for some 50 design students and local design professionals. We thought our lecture was scheduled too late to get a full class but we learned that many students work during the day and take design courses sometimes until 23h in the evening. Our lecture explored case studies including bricks made of bacteria and future concepts based on new materials developments. We also brought in material samples so the students could explore the look and feel of the materials we reviewed in our lecture—we found that these samples are great tools to start discussions with and between the students. 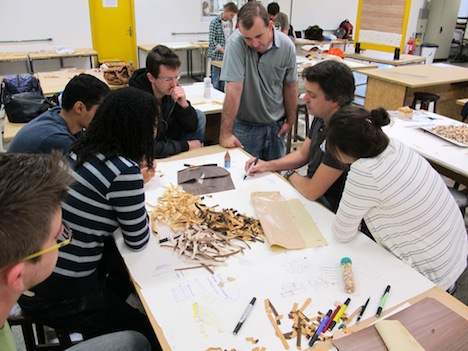 The materials we addressed in the off-campus workshop were provided by Schattdecor, a company that prints decor paper for the furniture and flooring industry. Our one-day workshop for 25 design students focused on brainstorming new applications for paper waste. The beautiful paper is leftover materials (pre-consumer waste) from the color proofs and large wood prints that come on paper rolls with up to 2 meters width. We agreed with Schattdecor that this 'waste' is too beautiful to be wasted (some of it ends up being burned). The director Flavio and his colleagues showed us the manufacturing process and the printing tests that end up as leftover materials. Werner (the company's sustainability expert) had already started experiments with the leftover materials. 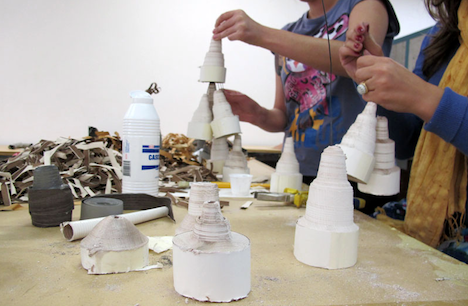 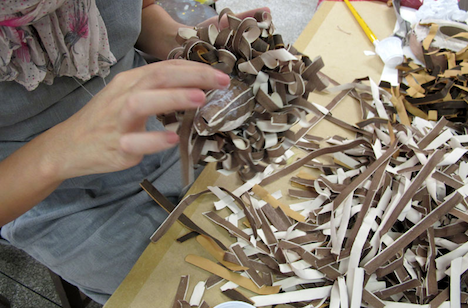 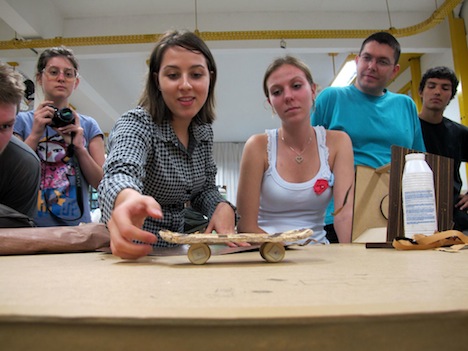 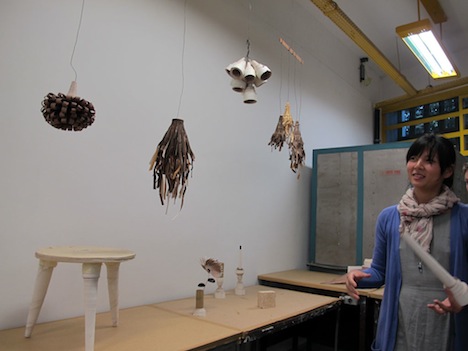 The workshop itself was a great experience. First, we were able to demonstrate to the design students that this was a non-fictive design challenge through the support and participation of a few employees of Schattdecor. The results that the five teams realized during over the course of a single day were so diverse that it opened up a new and wide range possibilities for future applications. The winning team was awarded with cool shirts freshly delivered from Core's headquarters in New York City. It was also a good exercise to see that working with industrial leftovers can be an inspiring challenge for designers. A good example is that the workshop also opened up a new discussion between the Schattdecor and the PUCPR university to research possible applications in design for future and more intensive design research. Of course, we won't be able to follow the next steps in person but we learned that most Brazilians are heavy Facebook users which will allow us to keep in touch during our ongoing journey. 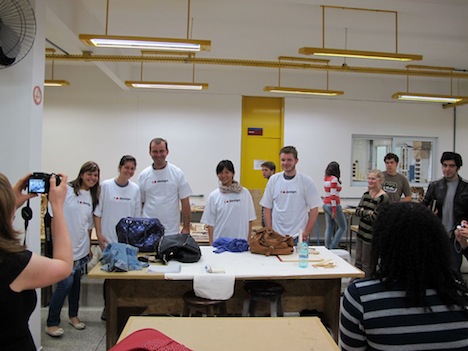 Next Steps and Destinations

Currently Aart and Paula are in Buenos Aires, Argentina. At the Metropolitan Design Center (CMD) they will be visiting and interviewing local designers and experts to get a better understanding of the sustainability examples and challenges in Argentina. The interviews will be broadcast live at the Materials Cafe, a special event focused on materials and design during this year's Hanover Fair (4-8 April 2011) in Germany.

They will be hosting lectures and workshops in Chile at the DuocUC, one of the largest institutions for higher education in the country. Further programs for New Zealand, Australia, Indonesia and Southeast Asia are being planned.

Keep In Touch, Get In Touch! 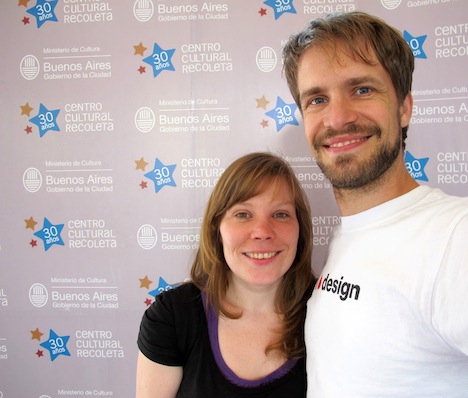 Paula and Aart in Buenos Aires

Want to meet up? Their schedule of activities develops as they go and welcomes invitations from interested designers, schools and companies. You can email them at info@itsnoteasybeinggreen.net.