An Ode to Japanese Creativity 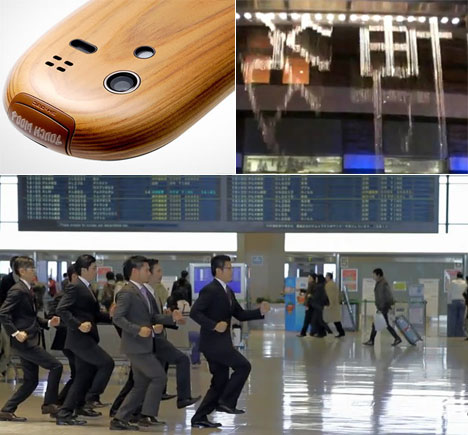 With all of the bad news going on in Japan today, I thought I'd take a minute to show random clips of some of the remarkable and quirky creativity that Japan has become known for.

This first video was posted to YouTube just one day before the disastrous earthquake. An ad for DoCoMo's beautiful Touch Wood phone shot by creative firm Drill Inc., it shows a massive xylophone constructed in the forest (from scrap wood), keyed to play Bach's "Cantata 147" by means of a rolling wooden ball:

(The "making of" for that video is posted here.)

This second video is of an amazing water fountain that can "print" words and images, constructed in Fukuoka:

This third video is of ex-MMA brawler Genki Sudo, the relentlessly creative kick-ass fighter—his bouts have to be seen to be believed—who retired early to reinvent himself as an artist. It's a music vid of his band World Order doing the song "Machine Civilization" and featuring their trademark "running salaryman" choreography:

We know this is a small and perhaps meaningless homage in face of the disaster unfolding in Fukushima, but we have faith in your creativity, Japan, and we know you will eventually repair and rebuild.

An Ode to Japanese Creativity