Children can Change the World! Design for Change School Challenge 2011 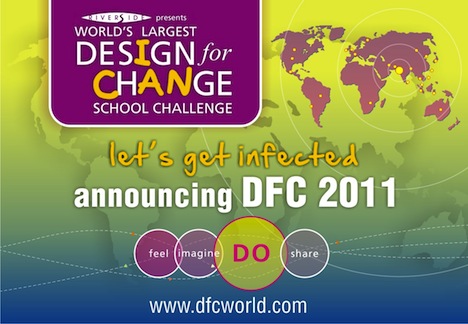 Children CAN change the world! As we mentioned last year, the Design for Change School Challenge began in 2009 when the founder Kiran Bir Sethi launched an initiative to engage 20,000 schools and 100,000 students across India in a contest to change their communities. As William Drenttel writes in his profile of Bir Sethi on Design Observer:

The thousands of projects submitted to the "Design for Giving School Contest" ranged across nine languages and diverse imperatives. Among them: Save Our Mangroves, Help Reach the Unreachables, Avoid Transgender Discrimination, Care for and Protect the Homeless, and Stop Child Marriages. Also proposed were Collect Plastic Bags Week, Playground for Children, Dignified Attire, and a Stop Spitting Campaign. My favorite proposal came from a village where the crematorium was located next to the schoolyard. Children who had clear sightings of burials during recess organized to petition the town council to erect a wall blocking their view. The wall doubled as a space for posting public announcements.

Get your school and community involved in this year's Design for Change School Challenge! You can start as early as NOW but all entries will be collected for jury on October 2nd, Gandhi's birthday. Watch Sethi's message to children around the world and see some of the remarkable stories from participating children after the jump!

Children can Change the World! Design for Change School Challenge 2011