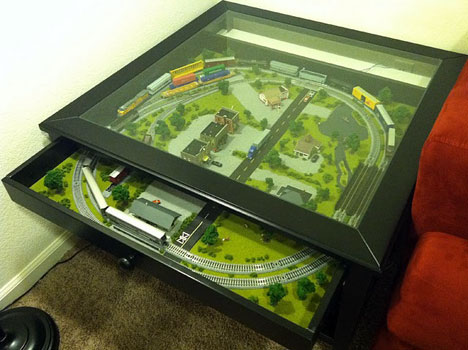 We've seen tables hacked with monitors and videogames before, so it's nice to see one that's been modified to accommodate a more analog form of entertainment: A good ol' fashioned train set.

An Ikeahacker named Jaxan took an Ikea Liatorp coffee table, painted and stained it, and had a plastic drawer custom-made to replace the four-sectioned one it came with. He then downloaded a train track layout program from anyrail.com, acquired the necessary components, and soon Coffeetableville was complete:

Jaxan, you should check out Jiang Qian's T-Box concept and if you fancy Shanghai you oughta look into today's Ikea job listing. Maybe you could make a high-speed-rail version.