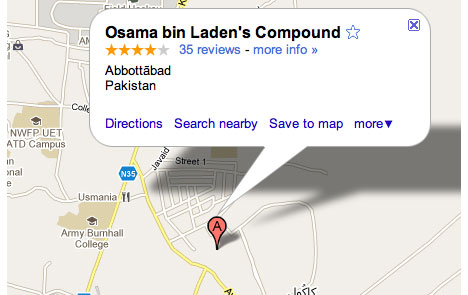 In what's becoming an increasingly familiar sign of the times, a real-world event has been accompanied by electronic repercussions beginning with pinprick blips and bleeps that snowballed into a shut-down of the New York Times' website. Osama bin Laden's death has also become the latest example of a fame-via-connectedness phenomenon Andy Warhol could only have dreamed of, where witnesses to historical events become participants.

Thus a Pakistan-based IT consultant and Twitter user named Sohaib Athar has become "the [first] guy who, while live-tweeting a series of helicopter flypasts and explosion, unwittingly covered the US forces helicopter raid on Osama Bin Laden's compound," while Keith Urbahn, former chief of staff for Donald Rumsfeld, is recognized as being the first person to break the resultant news by Tweeting the following: 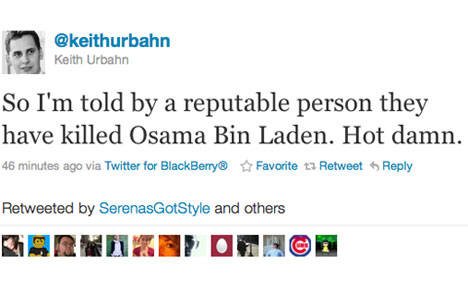 Savvy GoogleMap users were quick to follow up on the attack by producing something US Special Forces would have been dying for previously—the clearly-labeled location of Osama bin Laden's compound. Next came attendant Yelp-style reviews like "Great hideout would use again."

Amusingly that last review, rated at 5 stars, is followed by "241 out of 244 people found this review helpful." 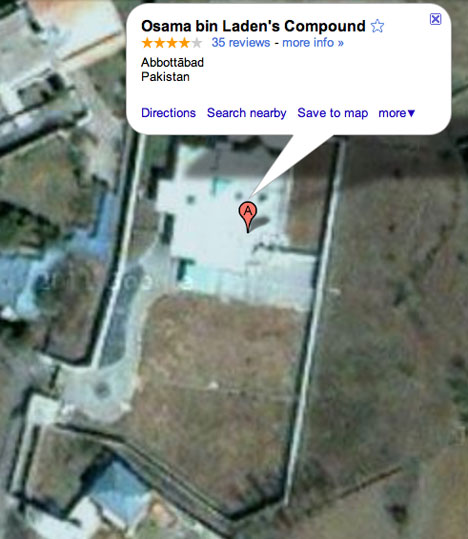